Elite Division to begin in hockey with 2019-20 season

The Elite League is coming to hockey in 2019-20, making the races throughout the pyramid more meaningful than ever. 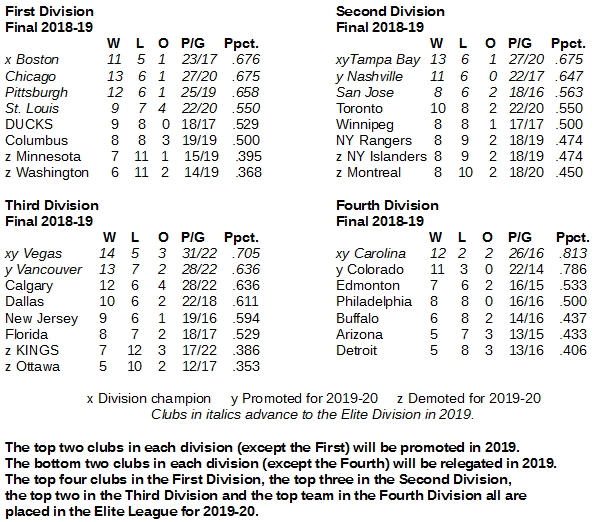 The assignments of teams to hockey's Elite League will be decided the same way they are decided in baseball and basketball. The top half of the First Division from the previous season (four teams), the top three from the Second Division, the top two from the Third Division and the top team from the Fourth Division all are entered.

Additionally, any team that led a traveling championship in victories shall be entered, if it has not qualified in the pyramid.

We didn't actually need a new incentive to produce a terrific race on top of the First Division, where the Boston Bruins prevailed by one percentage point, .676 to .675, over the Chicago Blackhawks. The Bruins needed to win their last three games in the top tier to surge past Chicago and the third-place Pittsburgh Penguins (.658).

But the Blackhawks, Bruins and Penguins all will go to the Elite League, as will the next team on the First Division ladder, the St. Louis Blues. The Ducks finished barely behind St. Louis and out of the Elite League.

Chicago and St. Louis, the only two teams to occupy the First Division since we began the competition in 2015-16, will return there again in 2018-19.

The Lightning and Predators both are original First Division teams, but the Lightning was relegated after the first year and the Predators were relegated after the second. Both also will be entered to the Elite League. Also going to the Elite League from the Second Division are the San Jose Sharks, who won a close race with the Toronto Maple Leafs for the designation.

A decision about who would be spared relegation from the Second Division between the New York Rangers and the New York Islanders came down to a tiebreaker as both teams had identical records.

In future seasons, goal differential will be instituted for consultation under these circumstances. Until that takes effect in 2019-20, the tiebreaker at this point becomes head-to-head performances. The Rangers came out ahead. Each team won two of the four games they played, with the Rangers coming out ahead in total goals, 15-12.

Thus, the Islanders will join the Montreal Canadiens in relegation to the Third Division. The teams replacing them through promotion from the Third Division are the Vegas Golden Knights and the Vancouver Canucks, who each also will enter the Elite League.

The difference between second or third place in the Third Division is the difference between promotion to the Second Division and Elite League status or nothing. This time, that came to a tiebreaker, as the Canucks and Calgary Flames both totaled 28 standings points in 22 games. But Vancouver won on the next criterion, more wins in the same number of games, 13 to 12. Thus, the Canucks won both prizes and the Flames won neither.