The first running of the Brazilian Big Six in 2018 included three clubs from São Paulo. At the end of the year, there was only one. And a Rio de Janeiro club, Flamengo, won it. 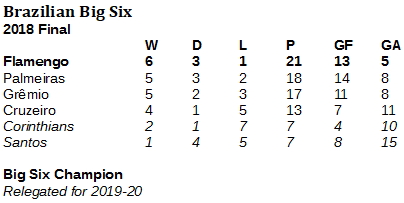 The core of the Brazilian Serie A is the four leading teams from Rio de Janeiro and their four counterparts in Sao Paulo, but that's not how the Brazilian Big Six is playing out.

Going to the 2019-20 season, the Big Six will consist of one club from Rio (Flamengo), one from São Paulo (Palmeiras), one from Paraná (Athletico Paranaense), one from Rio Grande do Sul (Grêmio), and two from Minas Gerais (Atlético Mineiro and Cruzeiro).

The Big Six began its first run in 2018 with three clubs from Sao Paulo, but Corinthians and Santos won three games between them and now are going down to the Middle Six. Atlético Mineiro and Athletico Paranaense are coming up in their place as the top two finishers in the Brazilian Middle Six from 2018.

At the top of the Big Six, Flamengo prevailed over Palmeiras by three points, the distance of one win. There was no question about these two clubs being the best in Brazil. In the Serie A table, Palmeiras finished with 80 points for first place over second-place Flamengo, which finished with 72. Each of their head-to-head meetings during the Serie A season ended in a 1-1 draw. 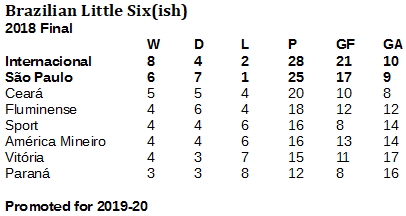 Keep an eye on Internacional, which returned to Serie A in 2018 and burned up the Brazilian Little Six(ish) with only two losses in its 14 games. The Porto Alegre squad, one of the most prestigious in Brazil, was in hard times when this site began tracking Brazil, but Colorado is back now, finishing third in the overall Serie A standings and winning the Brazilian traveling championship for 2018-19.

Internacional will be promoted for 2019, along with São Paulo, which lost only one game in the Little Six(ish) to finish in second place. Being demoted from the middle to the bottom are Bahia and Chapeconse.