RB Leipzig won the traveling championship across Germany in 2018-19, while the standings all-time tightened up between Bayern Munich and Borussia Dortmund. 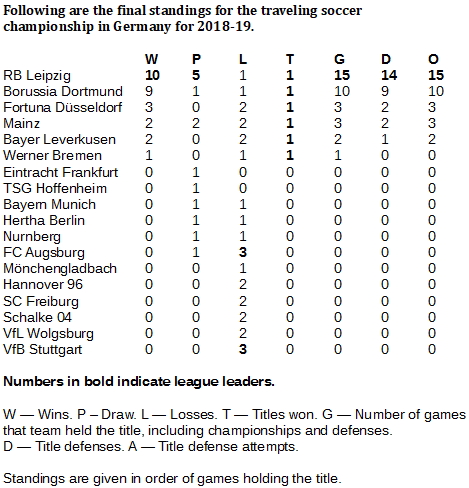 The all-time traveling championship race in Germany tightened up considerably in 2018-19.

Bayern Munich, the runaway leader through 2017-18, failed in two tries to procure the championship in 2018-19, opening up the race. Borussia Dortmund, the second-place club in the all-time standings, took advantage — actually made that advantage — rolling up 10 games of championship.

Through 2018-19, Bayern Munich still has the all-time lead with 34 games of title, but Borussia Dortmund is second with 30.

The big winner in 2018-19 was RB Leipzig, which totaled 15 games of championship for the season and now is third all-time at 17. Leipzig won the prize with a 4-0 win at Fortuna Düsseldorf on Jan. 27 and kept it until the very last game of the season, a 2-1 loss at Werder Berlin on May 18. Right before that, Leipzig drew Bayern Munich, 0-0, again denying the Munich squad the title.

Werder Bremen now is fourth all-time in Germany with 13 games of championship. But the Hanseatic 11 is in position to improve its standing quickly, for it will take the championship into 2019-20. 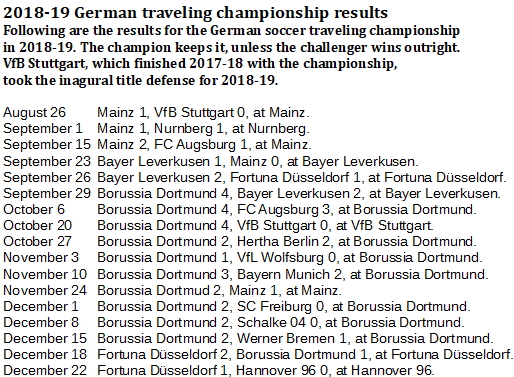