Once a Brazilian power, Internacional returned to Serie A in 2018 and rose to the top of that nation's traveling soccer championship for the season. 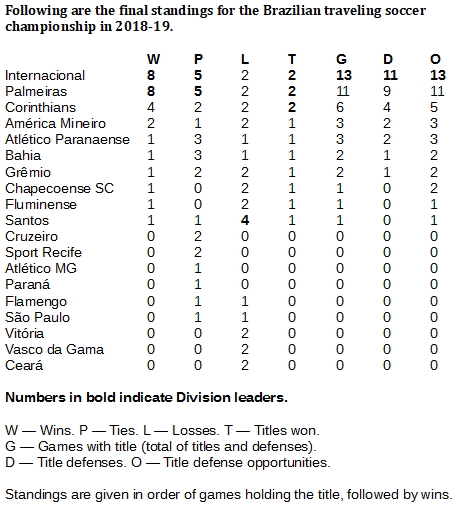 Around the time we began tracking the Brazilian traveling soccer championship, which would have been 2016, Internacional was at a low ebb. The club began Serie A strong, but somehow went 14 straight games without a win at one point and it was relegated for the first time in its history. Internacional didn't even play for the traveling championship that first year, and it wasn't at the top level the second year.

But 2018-19, our third season with Brazil, restored Internacional as one of the leading clubs. Not only did Colorado rocket to third on the 2018 Serie A table the moment it returned to the league, but it also finished on top of the season's traveling championship standings. For what it's worth, also, Internacional debuted in the Brazilian Little Six(ish) and won a solid title for promotion to the Brazilian Middle Six in 2019-20.

In the traveling championship, Internacional won eight and drew five of its 15 appearances, the same marks as Palmeiras. Internacional contested the prize for the first time ever with a 2-1 win at home against Corinthians on May 27, then held on for seven defenses.

Internacional added a five-game title in the fall, which was enough to stave off a late championship blitz of 11 games by Palmeiras.

Those 13 games of championship don't make Internacional an immediate contender for the all-time lead. Instead, Palmeiras broke out of its tie at the top with Flamengo to reach 27 games. Flamengo didn't win in two opportunities for the championship in 2018-19 and remains at 16. Chapecoense improved by one game in third place with 14, and Internacional now is fourth with 13. 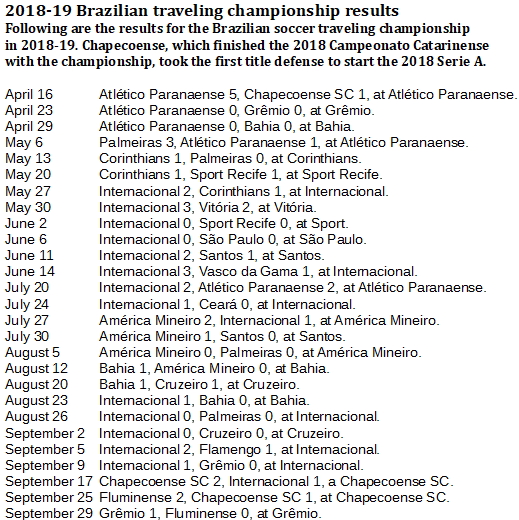