Napoli actually topped Juventus when we ran the Italian pyramid for the first time in 2017-18. But Juventus climbed to the top in 2018-19.

Juventus won the Italian Serie A eight straight times through 2018-19. But when we broke the Serie A into an internal pyramid for the first time in 2017-18, Napoli beat Juve by just a tad, 22 standings points to 20.

Juventus now has restored what seems to have become the natural order in calcio, winning the Italian Big Six in 2018-19. The Turin squad was barely better this time, hitting 21 standings points, but Napoli took four losses and fell to the middle of this table with 14 points. Atalanta finished second at 17.

Internazional and Sassuolo each won only one game in the Big Six, ticketing their relegation in 2019-20. Milan, which spent its banishment to the second division by winning it on total victories over Torino, is headed back up, and bringing Torino along. 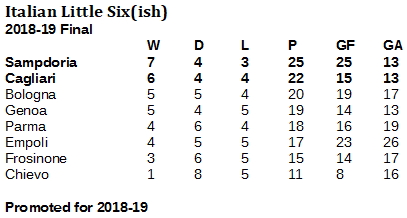 Sampdoria and Cagliari finished on top of the Italian Little Six(ish), gaining promotion to the Middle Six in 2019-20. Udinese and SPAL each won only one game in the Middle Six and are headed to the lower rung.