Leinster overtook Munster at the tail end of a fantastic race for the Five Nations traveling rugby union championship in 2018-19, the first year of the championship. 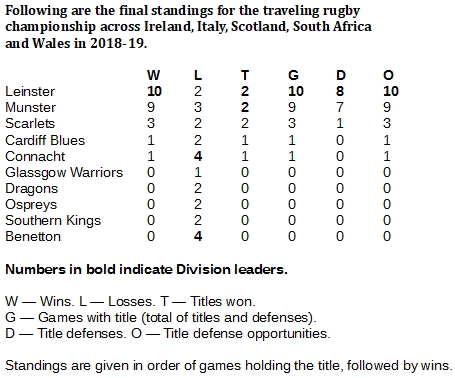 Leinster turned out an historic double-championship rugby season in 2017-18, winning both the Pro 14 and the European Champions Cup. No other Pro 14 club had ever done that, and only five other clubs had ever done it.

Turns out that Leinster also won Pro 14 in 2018-19. But Leinster didn't dominate as much as all those results suggest. In fact, the Dublin side barely finished ahead of Munster in our Five Nations traveling championship for 2018-19.

Leinster, defending the Pro 14 title, took the first defense with the traveler and lasted one game before falling, 23-21, at Scarlets the second game of the season. Leinster got it back with a 20-3 win against Connacht in Galway on Sept. 29, then held on for six defenses.

But this chase began to look a lot different when Leinster ventured into Limerick to take on Munster on Dec. 29. The Munster side chalked up a 26-17 win before embarking on four title defenses. A loss at Scarlets ended that streak on March 2, but Munster's 45-21 win at its Cork location against Cardiff Blues began another four-game streak to end the regular season.

Going to the Pro 14 playoffs, Munster held nine games of title, compared with eight for Leinster. But they met in the semifinals, and Leinster scored a 24-9 win before beating Glasgow Warriors, 18-15, in the league championship game at Glasgow. With that, Leinster overtook Munster with 10 games of title for the season championship.

Leinster also takes the prize into the 2019-20 season. 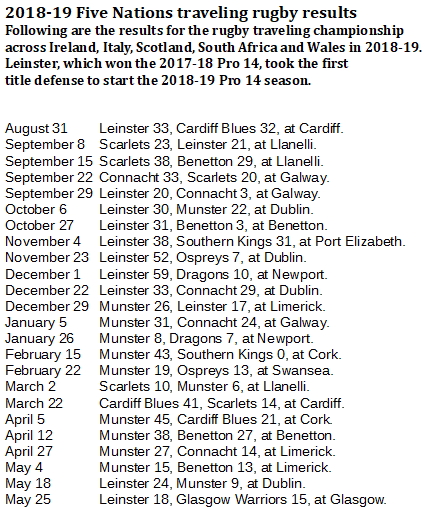