Manchester City has embarked on an historic crushing of top English competition for the last two years, one lopsided win after another, cruising to two straight English Big Six championships. 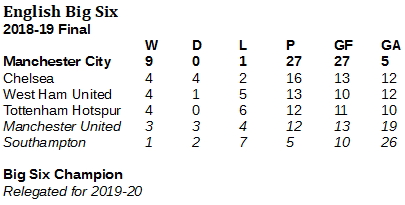 Manchester City took another happy romp through the English Big Six in 2018-19, winning nine of its 10 games and finishing well ahead of everyone else.

In two years of the inner pyramid, which comes to 20 games, City has outscored its opponents 54-16, an astounding mark of dominance against this level of competition. The Premiership is easily the deepest league in the world and it makes a strong argument for being the best. The Big Six is the cream of that league. For some one team to tear through that competition and come out of it with a goal differential of almost two per game in its favor is all but inconceivable.

If Paris Saint-Germain outscores its French Big Six opponents 59-15 in 20 games, which it has, big deal. Everyone knows that Ligue 1 is an inch deep. The English Big Six goes all the way down, and then some. Liverpool, which won the 2019 Champions League, wasn't even in the 2019 Big Six because it had been relegated a year earlier.

And look who is being relegated from the Big Six this year – Manchester United (!) and Southampton. Mind-blowing truth: in two years of running the English Big Six, it already has demoted Liverpool, Arsenal and Manchester United. The only teams that have survived the two years in the top tier are Manchester City, Chelsea and Tottenham Hotspur.

Hotspur lost the 2019 Champions League final to Liverpool. In the English Big Six for 2018-19, Hotspur finished fourth, losing six of 10 games. Chelsea finished a distant second place to City with 16 standings points, 11 back. West Ham United came in third at 13. Hotspur and United actually tied for fourth, but Hotspur won the first tiebreaker, which is victories.

Southampton, which won the Middle Six in 2017-18, won only one game in the Big Six a year later and will join Manchester United in relegation to the second level.

Somewhere back in the mists of time, Monty Python sent up a Beatles documentary with a news reporter offering this account of one rock star: "He was born in Liverpool, raised in Liverpool, educated in Liverpool, and his football team is Everton." Something like that. Anyway, it's how the English Middle Six came up in 2018-19, with Liverpool winning it and crosstown rival Everton coming in second.

Liverpool went unbeaten in the second tier with seven wins and three draws. At the bottom of the Middle Six table, Burnley went winless after claiming the Little Six(ish) championship in 2017-18. Joining Burnley in relegation is Leicester City. 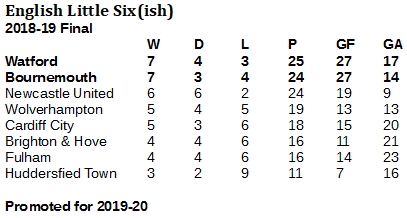 Watford, which finished at the bottom of the Little Six(ish) ladder in 2017-18, came all the way to top in 2018-19. The second promotion to the Middle Six goes to Bournemouth, which finished tied for the position with Newcastle. Bournemouth prevailed on total victories.