The competition in French rugby isn't always fascinating. The best team over the long haul is Toulouse. But the competition is intense and the discourse is like nothing else. Those who believe something might be bankable in contemporary academic discourse about gender should find deep mining in the relationship between rugby, masculinity and any binary that might be associated with Frenchness.

The howling wind tells us the game had the misfortune of entering France through Paris, where ideal masculinity was alleged to decline opportunities for physical violence and pursue opportunities for personal expression, thus producing a light-footed game that mocked rugby's rugged ethos. It was up to the less bookish real men of southwestern France to set the game straight and defend rugby's soul from Parisian interlopers, and for succeeding they were anointed as rugby's Chosen People.

We'll see as we go along how much of that is true. One way to see where rugby is at in France is to look at a map of the Top 14, which is the top French league. It's a little startling. Of the 14 teams, 12 are in the southern half of France, and nine are in the southwest regions, Nouvelle-Aquitaine and Occitane. Six of them are in Nouvelle-Aquitaine. The only two clubs in the north half of the country are the two Parisian clubs, Stade Francais and Racing 92.

So, there is a clear cultural and geographic dynamic here. It's the Southwest vs. Paris, the sodbusters vs. the sophisticates, on the home ground of the former, which is rugby. Unless the Parisian clubs are better. Which they usually aren't.

One team that has effectively worked the intersection between the new marketing sensibility and the French cultural clash over rugby is Stade Francais, which sells itself not so much to the Parisian man wearing brown shoes as to women, families and the gay community. What other athletic team across the universe has adopted pink as its primary color? And after watching Stade Francais play rugby in pink, one imagines other teams will pick it up, because that color really does pop.

What do the old guards think about Stade Francais putting out a calendar featuring nude photos of its players every year? They hate it. But consumers love it, and the pink jerseys sell madly. Now and again, Stade Francias will rent out an 80,000-seat venue like Stade de France, cut ticket prices steeply, add in some musical entertainment and pyrotechnics, really turn that game into an event, and they'll make a bid to pack it.

This club is seriously attempting to sell rugby in Paris. Does all of this offend the southwestern sensibility of taking its rugby seriously and without the frills? Certainly. But remarks reported from Stade Francais officials to those sorts of questions amount to "Who cares?"

Along with all that, the Top 14 is the richest rugby league in the world. The league's TV contract brings in 97 million euros per year, which is about $107 million right now. It doesn't sound like huge money from the standpoint of American sports. The smallest big-league baseball markets -- Kansas City, Cincinnati and Milwaukee -- come in around half of that or less just from local TV.

But the growth for rugby is brow raising. In 2013-14, the French league's television contract was good for only 31 million euros per year. And we're looking at a sport that has come to avowed professionalism quite recently and maybe hasn't tapped all of its marketing possibilities. One surmises that the shift from amateurism to professionalism is a generational undertaking. The average house for a rugby game at the French top level has more than doubled in the last 15 years to 14,624 in 2018-19.

By comparison, the salary caps and actual spending practices of the top rugby leagues in the English speaking world come to about seven million euros, about $7.8 million, for the English Premiership and the Pro 14, which takes in Ireland, Scotland, Wales, and South Africa. Super Rugby, which includes teams from Australia, New Zealand and South Africa, has a salary cap of $5.5 million Australian, which comes to about $3.8 million in US dollars. We can debate whether the French or the Kiwis are the game's true expositors, but what can't be debated is that the money is in France.

There is a downside, of course. Because the French league has so much money compared with the rest of the rugby world, it also attracts the better players from around the world, making the league stronger. It also means Frenchmen aren't getting that playing time, and there is some concern that the cosmopolitanism of the French league has undercut the development of the French national team.

Additionally, this new world of market professionalism is a savage place. If you're operating in a town where you just can't squeeze out more than $15 million in revenues, then your payroll is capped at $7.5 million, and you will have trouble, first competing with clubs that can pay $12.5 million, then with staying in business at all. A good many clubs are walking that line.

So, the French have an interesting rugby league working, quite a bit more interesting than their soccer league, though the soccer league averages about 8,000 more per house, 22,833 to an opening in 2018-19.

The most successful rugby outfit in France is one of the southwestern clubs, Toulouse. They've held a French rugby championship 120 times since 1892, and Toulouse has won 20 of them. The most recent of those came in 2018-19, when les rouge et noir cruised through the Top 14 with 21 wins and two draws in 26 games, then pushed back La Rochelle and Clermont in the playoffs to claim their first league title since 2012.

Stade Toulousain, as it is officially known, also made easy work of the first French traveling rugby championship, tracked during the same season. The club notched 13 games of championship, about half of the schedule, leaving second-place Montpellier well behind with only four games of title.

Toulouse first snagged the championship with a 40-0 home field stomping of Bourdeaux Begles on Nov. 3, then hung on for 11 more games before falling, 25-10, at Toulon. The title came back to Toulouse in the Top 14 final, a 24-18 win against Clermont. Thus, Toulouse takes the French traveling championship to the 2019-20 season. 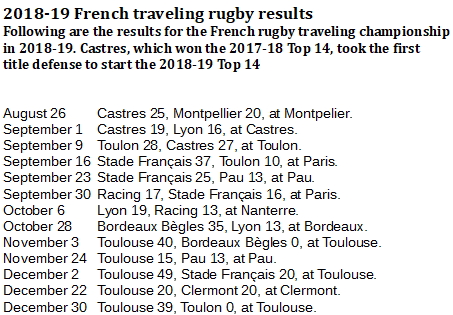 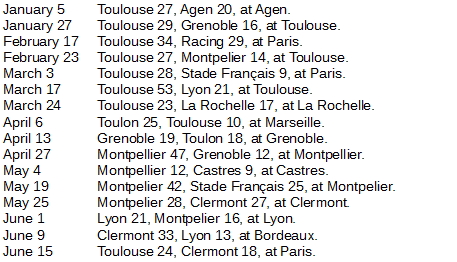