On the All-Ireland Hurling Championship and the NBA

The NBA Commissioner has talked slightly about restructuring the league's season. Perhaps a structure along the lines of how they run Irish hurling, or, better yet, the Philippine Basketball Association might have the answer. 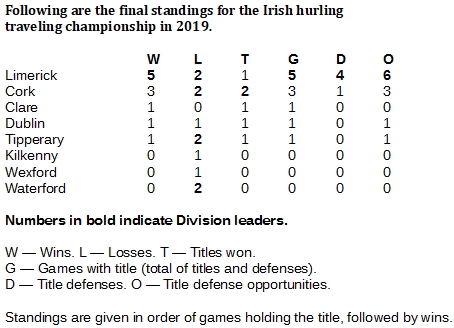 \
The path through the traveling hurling championship in Ireland has many turns, and it did not go all the way in our first run here in 2019.

The grand prize in the Irish game is the All-Ireland Senior Championship, the final of which is held every August at Croke Park in Dublin before audiences right around the stadium capacity of 82,300. But the traveling prize had to be retired for the year long before then.

Not to change the subject, NBA Commissioner Adam Silver said at an analytics conference earlier this year that it wouldn't be a terrible idea to reduce the NBA regular season to 70 games from 82. The problem, naturally, is finding a way to replace those six home openings for each franchise in a way that would be "meaningful."

Something like, maybe, a meaningful separate tournament or meaningful international competition. We like the way the commissioner is thinking. Not only does the NBA regular season take much too long to decide much too little, but the league and the game are surging in popularity around the world and the NBA is in a position to leverage all of that to enter any humongous market on the planet that it wants, subject to geopolitical considerations. Sacrificing that tedious regular season to see where the world leads is easy.

You're the NBA, everyone around the world loves you and professional leagues have popped up all over the world trying to brew up their own local versions of the show. You want to expand your footprint. You might want to consider Seattle, try to salve that wound from the Supersonics bolting for Oklahoma City and enter the only top 20 TV market where you're not already at least within easy driving distance (The distance between Tampa and Orlando is easy; the traffic is not.). Seattle gets you a TV market of about 5.5 million people. Next in the states without a team are St. Louis and Pittsburgh, both around 3.5 million.

But if you're the NBA, you don't absolutely have to be thinking about adding this footprint of 5.5 million and that footprint of 3.5 million. You can be thinking about Istanbul, one of the great historical cities of the world, with a market of 15 million people and three permanently licensed Euroleague clubs. Maybe the NBA could do business in a super huge market so interested in basketball.

We're bracketing off political considerations here, so it's fine if you just don't want to do business with Turkey at some moment. The point generalizes to locations where you're fine doing business, and there are a lot of bigger fish than Istanbul, anyway.

The PBA has been around for 45 years. It's basically an industrial league, and a bit lopsided. Out of 12 teams, the majority of the championships are won by six that are owned by two big business empires. With an infrequent exception, all the games are played in Manilla. The franchises aren't defined by geography because they are all in Manilla.

The PBA is a serious matter for Philippine sports fans. The last game of the 2017 season drew 54,086. It's the oldest professional basketball league in Asia and, with a concern here and there, going strong. Why on Earth would the NBA not think about doing business there? Or in Tokyo, the largest market on the planet with 38 million people, twice as many as the Los Angeles area? Even if the NBA only interests a small percentage of 38 million, it's still a cash cow.

If we're Silver, we're dreaming of expanding into Seattle with big eyes on Manilla and Tokyo. Put all that together with Portland and the California teams. Now, the NBA has a nice footprint on the Pacific rim. And maybe Shanghai wants to play. Or Dehli. Or Jakarta or Seoul or Guangzhou or Beijing. All are metro areas of 25-35 million people, all are larger than New York and all are on the Pacific rim. Get all of that into one bag and you've got the largest conglomeration of markets in the history of trade.

Might there be some cultural or political impediments to entering those markets? Inevitably. Could it be that entrenched local interests will resist? How could they not? But it's worth exploring. Might basketball thereby become less "American?" America might care about that, but basketball shouldn't. While we're at it, Asia is an even greater opportunity for baseball, but we've digressed enough already.

Another aspect of the Philippine basketball season that's of interest here is its structure. The PBA season is three separate, consecutive championships, which are called "conferences." First, they play the Philippine Cup. Next, the Commissioner's Cup. Then, the Governor's Cup. All of them are meaningful. It can work. Play three separate seasons within one, structure them all a little differently and you've got a much more exciting calendar from start to finish.

The important consideration is that the seasons all be entirely independent of each other, which gets us back to Irish hurling.

So, Limerick began with the traveling championship in the National Hurling League and produced a successful season there, beating Waterford, 27-19, for the championship at Croke Park on March 31. Limerick lost the traveler to Cork four games into the season and the prize traveled through Tipperary and Dublin, but it returned to Limerick in time for the NHL championship game.

On, now, to the Munster championship, provincial level. Five teams in the group, with the top three going to the All-Ireland quarterfinals. Limerick lost immediately to Cork, which held on for one title defense before losing, 29-24, to Clare at the end of the pool. Problem is that Clare now held the traveling championship, but finished fourth in Munster and, therefore, did not advance to All-Ireland.

So, the Irish traveling hurling championship died for the year at Cusack Park in Ennis and shall lie silent until the start of the 2020 National Hurling League season.

It's not ideal for the traveling championship, but it does tell us something for any of the American pro leagues struggling to rescue regular seasons that have become a hindrance to enjoying the games. We believe, humbly, that our proposals in these pages for traveling championships and pyramids are a great way to accomplish that. Another way, replicating the Irish and Philippine examples, is to have multiple consecutive championships within the same season.

But in order to make, for example, three seasons in one all meaningful, the one feature to avoid is connecting the stakes of one season to another season. Qualifying All-Ireland teams through the provincial championships works fine for the Gaelic Games, as it suits local purposes. Global purposes, such as the NBA could pursue, would require keeping everyone in the game. 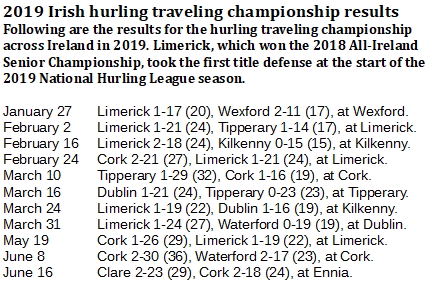