Paris Saint-Germain put up another dominant performance in the French Big Six for 2018-19, winning the division for the second straight season.

Paris Saint-Germain followed a dominant championship in the 2017-18 French Big Six with an even better year against that top rung in 2018-19.

The Parisian squad hit 9-0-1, scoring 30 goals in 10 games and allowing only six. The second-place team again was Lyon, and again by some distance, finishing at 21 points. The rest of the French Big Six, including PSG arch-rival Marseille, all struggled against PSG and Lyon. Newly promoted Rennes and Saint Etienne will survive with the top tier into 2019-20. Marseille and Monaco are going down to the Middle Six.

Nice and Nantes were the best two clubs in the Middle Six, so they are going up to the top in 2019-20. Nice had just been demoted, while Nantes is going to the top tier for the first time. Dijon and Guingamp were clearly the two worst teams at the middle level, well deserving relegation. 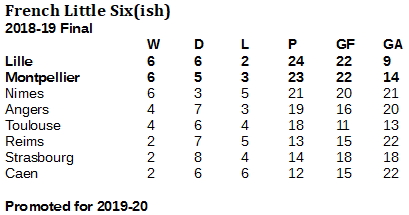 Lille edged Montpellier in the French Little Six(ish), but Nimes was right there. Lille returns to the Middle Six one year after its demotion. Montpellier barely missed promotion last season, and nudged Nimes by two standings points to gain promotion this season.