PSV Eindhoven turned in another dominant season of traveling soccer championship across the Netherlands in 2018-19, increasing its lead in the all-time standings. 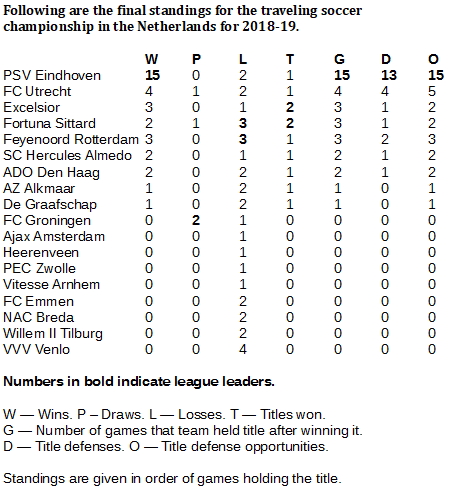 Three years into the Dutch traveling soccer championship, a clear pattern has emerged. We might call it PSV Eindhoven.

In the Eredivisie, Ajax Amsterdam, Feyenoord Rotterdam and PSV each have won the championship in the last three years. But only PSV has been a factor for the traveling championship in all three years, finishing all alone at the top once and tied for the lead one other time.

In 2018-19, it was PSV easily. The Eindhoven squad totaled 15 games of championship, well ahead of runner-up FC Utrecht, which had four. With its 15 games, Eindhoven increased its nation-leading total of games in championship to 35.

PSV Eindhoven's longest run, 13 games, extended a four-game title at the end of 2017-18 and brought it up to 17 games, the longest we've seen in Holland. The previous record of nine belonged to Feyenoord Rotterdam in 2016-17. Feyenoord Rotterdam finally snapped the new record streak with a 2-1 home-field win on Dec. 2.

Feyenoord finished the year with three games of title, increasing its total historically to 19, second on the Dutch list. Utrecht is third all-time with 10 games, followed by Ajax with nine. 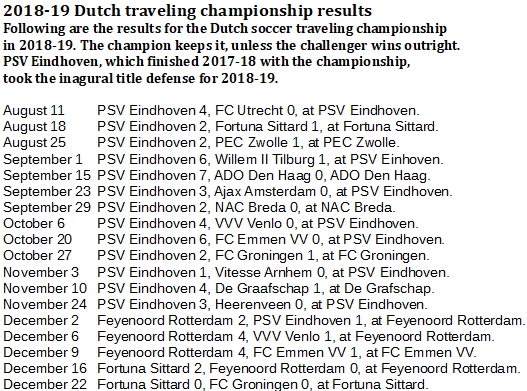 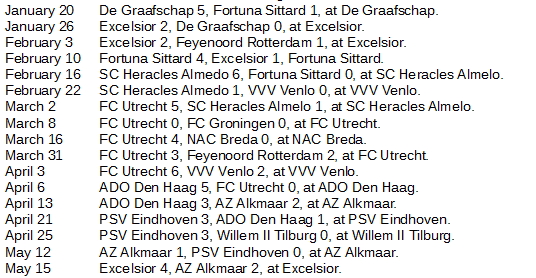