The Rams threw the ball all over the Coliseum Sunday, but the Tampa Bay Buccaneers threw the Rams around pretty good, too. Tampa Bay's record-setting 55-40 win put the title on an infrequent path. 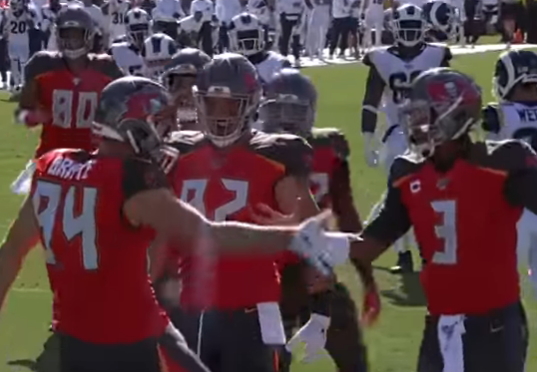 Tampa Buccaneers players celebrate in the end zone Sunday after Jameis Winston (3) threw a touchdown pass to Cameron Brate (84). Also in the picture is tight end Antony Auclair (82)(LA Big Leagues screen capture of NFL video. It is believed the use of this cropped, low-resolution screenshot, an infinitesimal portion of the work, is fair use in the absence of a public domain image of the news development under consideration).

When your quarterback passes for 517 yards and you lose the game, it's a good indication that your whole team is doing a lot wrong, including the quarterback.

This is the state of affairs the Rams must be contemplating after their stunning 55-40 loss Sunday at the Coliseum to the Tampa Bay Buccaneers, which ended a four-game National Conference traveling championship for the Angelinos.

Even more stunning was that Tampa Bay has won the National side championship. The Bucs entered the game with a 4-10 record on the NFC side in 20 years of running the pro football traveling championship. The Bucs last held the title for one game in 2014, and their only other NFC traveling championship was a  three-game effort bridging the 2002 and 2003 seasons. In the middle of that, the Bucs won a Super Bowl, though Super Bowls don't count in conference travelers.

Rams quarterback Jared Goff completed 48 of 67 passes for 517 yards and two touchdowns. Yet, he didn't have as much control over this game as Tampa Bay quarterback Jameis Winston, who hit 28 of 41 for 385 yards and four touchdowns. Winston threw only one interception, while Goff threw three.

In addition, the Rams couldn't run the ball, producing 28 yards and a lost fumble in 11 carries. Tampa Bay scored the first 21 points in the game, forcing the Rams into catch-up mode early.

The combined total of 95 points for the two teams set the all-time record for any kind of pro football traveling championship game. The previous record, coincidentally, was set in the first year of these championships, 2000, by the two Los Angeles teams when they were located elsewhere and playing for the league-wide title. On Oct. 1, 2000, the St. Louis Rams beat the San Diego Chargers, 57-31, for a combined 88 points, in San Diego.

The combined points record was matched three weeks later, on Oct. 22, 2000, when the Kansas City Chiefs beat the Rams, 54-34, in Kansas City. It was the first time the league-wide traveling championship ever changed hands, as the Rams had been granted the provisional title for winning the previous Super Bowl.

The 57 points scored by the Rams in the earlier win against San Diego remains the most points ever scored in any kind of pro football traveling championship game.

However, the Bucs do now hold the record for most points scored by one team in a National Conference traveling championship game. The previous record belonged to the Green Bay Packers for a 48-21 road playoff win against the Atlanta Falcons on Jan. 15, 2011.

The New England Patriots hold the record for most points scored in an American Conference traveling championship game with a 56-10 home win against the Buffalo Bills on Nov. 8, 2007.

All-time, the Rams let the National side traveling title go this time with 25 games of championship, one short of pulling even with the Packers for second place at 26. The Philadelphia Eagles remain the all-time National side leader with 29 wins.