River Plate won the season championship for the Argentine traveling soccer championship in 2018-19, but Huracán increased its lead in the all-time standings. 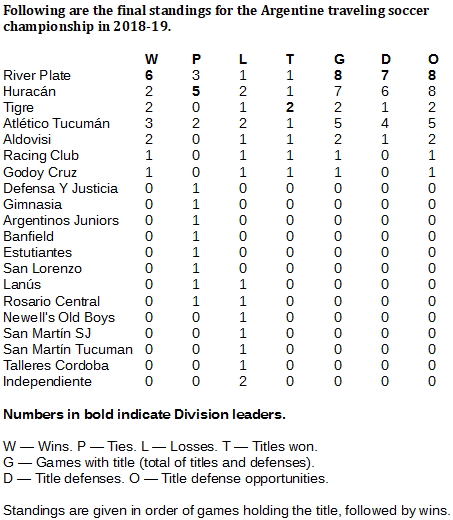 One peculiarity of Argentina's Superliga is its size. Most top domestic leagues have 18 or 20 clubs, and the Superliga had 26 in 2018-19.

Eventually, the Superliga looks to be down to 20 teams, which will take three more years of relegation cycles. When we began Argentina in 2016-17, Superliga included 30 clubs. The implications for the traveling championship, or any other, are huge.

For example, Superliga still doesn't play the double round-robin common in other leagues. Even at 26 clubs, that's a 50-game domestic season. So, Superliga plays a single round-robin for now.

Sometimes, then, clubs can get lost. In 2018-19, only 22 of the 26 Superliga clubs played for the Argentine traveling soccer championship.

Among them was Huracán, which has hung onto the title by the skin of its teeth like no other club. Of Huracán's 15 successful title defenses in the last two years, 10 have been draws. Huracán won only two of its nine games for the traveling championship in 2018-19, but piled up seven games of title and now has the all-time lead at 18.

Among them was not Boca Juniors, which entered the season tied on top of the all-time standings with Huracán at 11. Not even getting a chance in the over-stretched Superliga, Boca Juniors still remain in the second position all-time.

Aldosivi added two games of championship in 2018-19 and now is third all-time with nine. River Plate finally got on the board with eight games of title, its first ever, and now is fourth all-time. 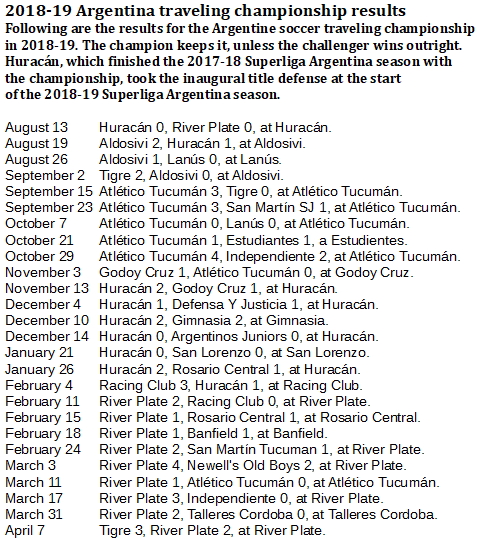