Saracens, as usual, played to the top of the Premiership in English rugby, claiming the season prize for that rugby union traveling championship in 2018-19. 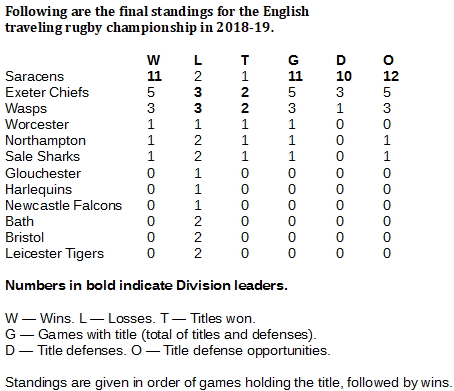 Through 2018-19, the London rugby union club Saracens won four of the last five Premiership championships. Starting with 2010-11, Saracens has finished in the top two of the Premiership table six times, never finishing lower than fourth during those years.

So, Saracens, as the defending Premiership champion entering the 2018-19 season, took the first title defense for the English rugby traveling championship, and made it last. The Sarries won nine straight matches to begin the season. It was enough to win the season championship.

Exeter Chiefs took the title from Saracens with a 31-13 win at home on Dec. 22, but couldn't defend it even once. Given another chance after beating Sale Sharks, 20-14, in Salford on March 2, Exeter tacked on three defenses before losing, 26-19, to Wasps on April 14.

If Exeter could have tacked a couple more defenses onto either of those titles, it could have challenged Saracens. Instead, the Sarries won the title back with a 31-14 home win on April 27, Wasps' only attempt at a defense of that title, then smashed Exeter, 38-7, in London on the second to last date of the season.

Though Saracens lost the final game of the season, 31-29, on the road against Worcester, it still ended the year with 11 games of championship. Exeter came in a distant second place with five games of title.

Worcester takes the championship to 2019-20. 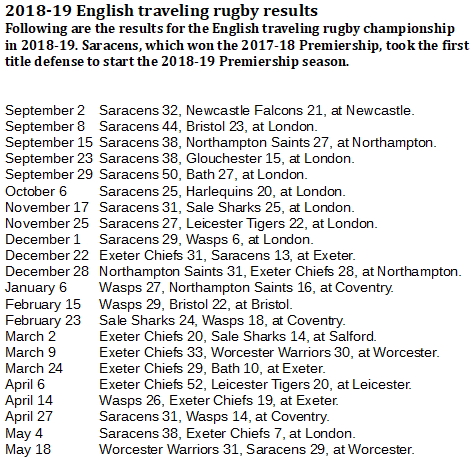