Three points for a win cost Liverpool the Premiership in 2018-19, but no rule could overwrite the Reds' dominant performance with the English traveling championship. 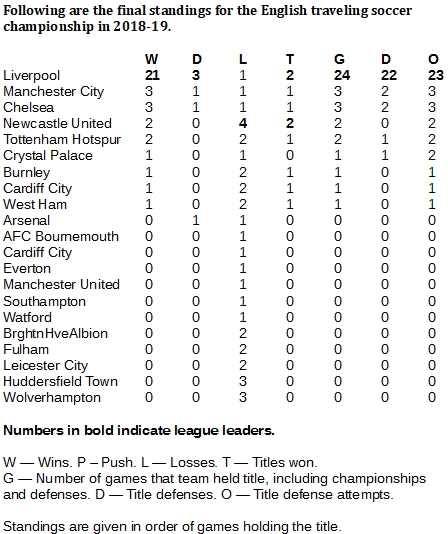 The Premiership race in 2018-19, the hottest ever between two teams at the top, showed as clearly as ever that "three points for a win" motivates playing to win while also raising the question of whether it really is the best way to pick the league champion.

With three points for a win, it is more prosperous to win than to not lose. It's been the international standard in soccer for 25 years, going back to the 1994 World Cup. In your old-style league giving two points for a win and one for a draw, Liverpool wins that race with 67 points, compared with 66 for Manchester City.

A well-known pro hockey league, the NHL, came upon an ingenious way to split the difference. It breaks ties and decides winners with overtime, followed by a shootout. But it doesn't excessively reward the winner or dock the loser of a game that goes overtime. The winner of that game gets two points and the loser gets one.

Under that scenario, Manchester City has 66 points in hand, adding a point for each draw, and there is a point still on the table for each overtime, so its possible upper limit is 68. Liverpool has 67 points in hand with a possible upper limit of 74. To maximize its standings points and reach 68, City would have to win both of its overtimes. But Liverpool still would tie for the title by winning only one of its seven overtimes, and it would win the title outright by winning only two. One can be pretty confident that Liverpool would have won a championship decided that way.

Here might be a consideration in favor of Manchester City: head to head. The two clubs drew, nil-nil, at Liverpool, and City won, 2-1, in Manchester. At two points for a win, though, Liverpool still would have won the league.

As far as the traveling championship at the English top level, it was Liverpool, unquestionably and by a landslide. Not only were the Reds' 24 games of title during the year the most recorded in four years of tracking England, but its 19-game streak running from August through the end of December was more games of title than any English club had ever accrued in a whole season.

It also sent Liverpool rocketing from near the bottom to the very top of the all-time standings with 28 games of championship in four years of tracking. City, which broke Liverpool's traveling title streak in January, lasted only two defenses before losing, 2-1, at Newcastle United on Jan. 29. City is second all-time with 25 wins.

West Ham is third all-time with 17 wins, followed by Tottenham Hotspur and Chelsea with 16. All three of those clubs held the title between the time Newcastle took it from City and April 14, when Liverpool took it from Chelsea in a 2-0 home field win.

Liverpool held on for four defenses through the end of the regular season and now takes the championship to the start of the 2019-20 season. 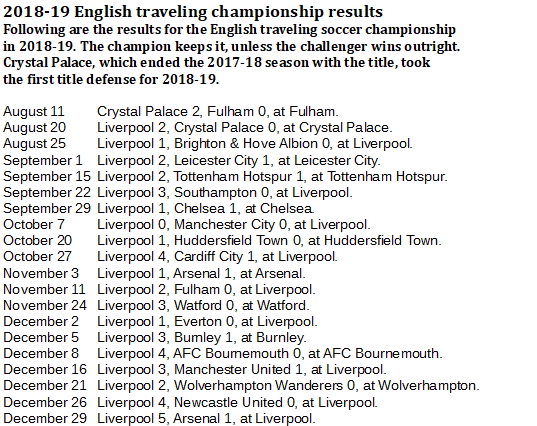 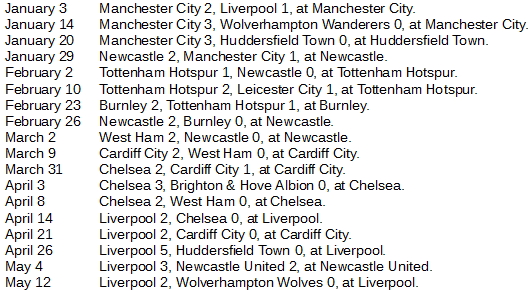