Edinburgh and Saracens foiled Leinster bids to catch Toulouse in the European rugby union traveling championship running through the 2018-19 season. 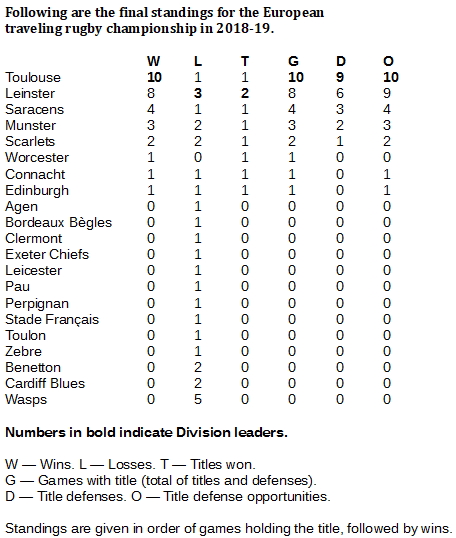 It came down to whether Leinster or Toulouse would come through 2018-19 as a double traveling champion. The difference makers were Edinburgh and Saracens, which won crucial games from Leinster and allowed Toulouse to prevail.

We might mark Oct. 21 as a critical early juncture of the continental championship, the day Leinster took the European title into the south of France, where hosting Toulouse treated the Dubliners to a 28-27 heartbreak. Two matches later, on Nov. 3, Toulouse smashed visiting Bordeaux Bègles, 40-0, to capture the French championship.

Toulouse then held the two titles concurrently until Jan. 12, a period of more than two months, before losing the Euro title in a rematch at Leinster, 29-13. The period encompassed seven defenses of the European title and five defenses of the French championship.

Toulouse made six more defenses of the French title before a 25-20 loss at Toulon on April 6. While that was happening, Leinster was mounting a serious attack against Toulouse's lead with the European title. Toulouse came out of its loss at Leinster with 10 games of title. Leinster, defending its title won from Toulouse three times, ran its total of titled games for the year to eight as it went to Edinburgh on March 22.

Leinster might be the best team in Europe and Edinburgh was a lower-half Pro 14 club in 2018-19. But Edinburgh hung a 28-11 loss on Leinster, taking the European championship. It happened that Edinburgh's next game, again at home, would be a Champions Cup encounter with Munster, which took the traveler in a 17-13 decision.

After two defenses, Munster dropped the Euro title to English champion Saracens. On their third defense, on May 11, the Sarries turned back Leinster, 32-16, winning the Champions Cup. In addition, they foiled a bid by Leinster to catch Toulouse on the season ladder for the European traveling championship.

Saracens, which had recently captured the English championship, now held both. That would not last. The entire traveling championship world was stunned when, on May 18, the final day of the season, Saracens took a 31-29 loss at Worcester Warriors. Thus, the Warriors held both the English and European traveling rugby championships entering 2019-20. 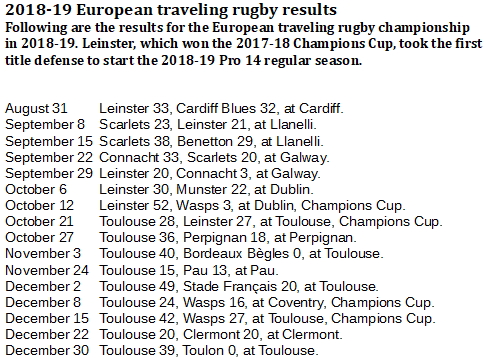