The New York Yankees lead the Elite Division at the end of its first regular season, but this chase probably won't be decided until the end of the postseason. 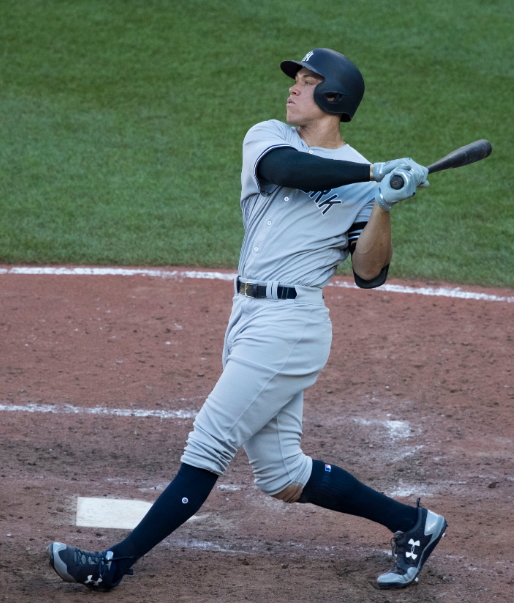 Outfielder Aaron Judge is one of many who has powered the New York Yankees to the top of the Elite Division entering the 2019 playoffs (Keith Allison/Creative Commons Attribution-Share Alike 2.0 Generic license).

The baseball season that is entering its final and deciding stages happens to present our first reckoning of an Elite Division, which also will crop up in some other sports.

In concept, the Elite Division is a tournament of champions, but they are the champions documented in these pages. In short, the best teams from the pyramids, traveling championships and regional four-by-four arrangements shall be entered into the next season's Elite Division.

For example, the 2019 Elite Division is composed of the top half of the 2018 First Division, the top three clubs from the Second Division, the top two from the Third Division and the top club from the Fourth Division. Any traveling champions who haven't qualified in the pyramid will be entered, as well as qualifying teams from the four-by-four who haven't qualified in the pyramid or the travelers.

The mix this created for the 2019 Elite Division has produced a robust, even competition that remains far from decided entering the postseason. Seven of the top eight clubs in this 11-team Elite Division are going to the playoffs, with a mere 6 1/2 games separating first place from eighth place. 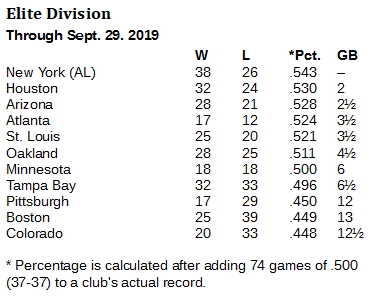 The New York Yankees lead the Elite Division ending the regular season, but their position is far from secure. It unlikely that the Yankees will finish on top of this pile without winning the World Series, and anything short of that for the Bronx Bombers stands to leave this championship up for grabs.

The Houston Astros are in second place, two games down and trailing the Yankees by 13 percentage points (.543 to .530) weighted to the mean, as we do these standings. The third-place club, the Arizona Diamondbacks, are the only contending club not in the playoffs. Thus, they are frozen at a mean weighted percentage of .528, which could win it if the Yankees and Astros both falter.

Or, the Atlanta Braves (.524), St. Louis Cardinals (.521) or Oakland Athletics (.511) could make a move. Anything can happen in these playoffs. If one of these clubs can turn up a four-game sweep anywhere in this near future, it's a race changer.

Way down these standings, almost at the very bottom, we find the Boston Red Sox, and this tells us something interesting about the Red Sox. It's true that the Red Sox have fallen a long way after winning two consecutive First Division titles and the 2018 World Championship. It's also true that it still took a pretty good club to beat the Red Sox in 2019.

The Red Sox will not be in the 2020 Elite Division. However, the Yankees, Astros, Braves, Cardinals, Athletics, Minnesota Twins and Tampa Bay Rays already have either qualified for return to the Elite Division in 2020, or have all but qualified.


The winner of the Elite Division also will be qualified for next year's version so that it can attempt a defense of its championship.