Dallas won the First Division across North American pro soccer in 2019 for the second time in four years of tracking. The Galaxy earned promotion to the First Division for 2020, while LAFC is being promoted to the Second Division. 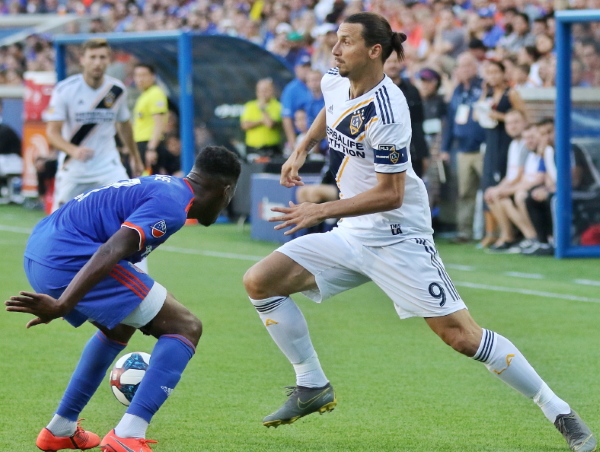 Zlatan Ibrahimović (9) scored 30 goals in 2019 for the Galaxy, helping them win promotion to the First Division for 2020 (Jamie Smed/Creative Commons Attribution 2.0 Generic license).

Of the clubs in Major League Soccer, Dallas is the most successful in the pyramid, finishing in the top half of the First Division in all four years that we have run it. No other club has done that.

Dallas won the first rendering of the First Division back in 2016, when the club also won the Supporters' Shield for having the best regular-season record in MLS. This year's offering wasn't nearly so prosperous across the league, barely securing a playoff bid with its seventh-place finish in the Western Conference.

But the Toros began hot in the First Division, winning their first three games. There was never a serious challenge. With their third straight draw, nil-nil at Seattle on Sept. 18, the Toros clinched the championship. On the final day of the regular season, Oct. 6, Dallas notched a 6-0 win against Kansas City. 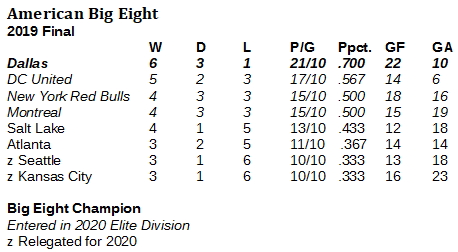 The loss for Kansas City sent that team into the Second Division along with Seattle, a charter member of the First Division that is going down for the first time. The only charter First Division clubs that have never left are Dallas, the Red Bulls and Montreal.

DC United, promoted back to the top tier in 2019 after being relegated a year earlier, finished second, its best finish ever. The Red Bulls came in third and Montreal fourth. All four of those clubs, finishing in the top half of the First Division, are entered to the Elite Division for 2020.

Outside of Portland, the Second Division was a wide-open affair. The Timbers made an easy claim to the championship with six wins and two draws in their 10 games. The only other club to win half of its Second Division games, the Galaxy, took second place and will be promoted with Portland to the First Division in 2020. 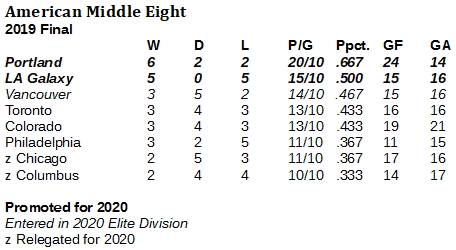 The Galaxy actually stumbled down the stretch, losing their last three Second Division games. So, the real race was for third place, the last Elite Division spot from this tier. A 3-2 win at home for Toronto against Colorado on Sept. 15 cleared the way for Vancouver to claim that position with a 4-3 win against the Galaxy in Compton on Sept. 29. 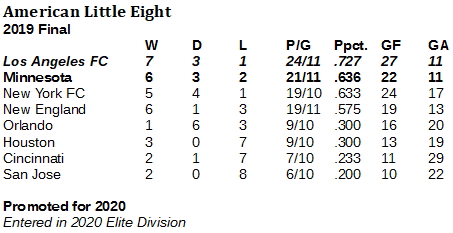 Thus, LAFC and Minnesota both will be promoted to the Second Division for 2020. LAFC also will be entered to the Elite Division.