The beat goes on with the pro football traveling championship. The New England Patriots dominate as much now as they have dominated the rest of the century. 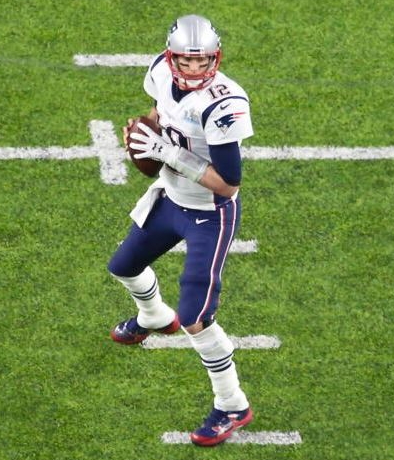 Here's Tom Brady in Super Bowl LII this past February against the Rams, helping the Patriots to their 12th pro football traveling championship since the designation was established in 2000 (Public domain image).

Comes now another account of the New England Patriots as the solar middle of 21st-century professional football.

The Patriots are on another one of their tears with the traveling championship across pro football, now working on a seven-game streak of championship with the end vaguely in sight, maybe.

The Patriots now are 63-11 all-time for the traveling championship going back to its beginning in 2000. And they've been as hot as ever the last five years, 22-3 starting with Super Bowl XLIX on Feb. 1, 2015, when the Seattle Seahawks threw a goal-line interception rather than hand it to Marshawn Lynch from the Patriots' one with 26 seconds remaining.

The Patriots notched a 28-24 win there, then held it for the first 10 games of the 2015 season before a 30-24 overtime loss at Denver on Nov. 29. A five-game title for the Patriots in 2017 ended with a 41-33 Super Bowl LII loss to the Philadelphia Eagles. But the Patriots regained the championship with their 13-3 Super Bowl win against the Rams this past Feb. 3, and they have held it ever since.

The Patriots have won their six games of defense this season by an average score of 31.7-8. Only once among those games have the Patriots scored fewer than 30 points, and only twice have they allowed more than 10.

The Patriots' most recent title defense was more or less typical, a 35-14 home field win against the New York Giants on Oct. 10. They will put the title on the line again on Oct. 21, when they visit the New York Jets. The Pats already have defended the championship against the Jets once this year, a 30-14 win at home on Sept. 22.