It would appear that the Golden State Warriors NBA dynasty has come to an end. Right through the teeth of that dynasty, though, the Warriors built a huge four-year lead in the men's American professional basketball traveling championship. 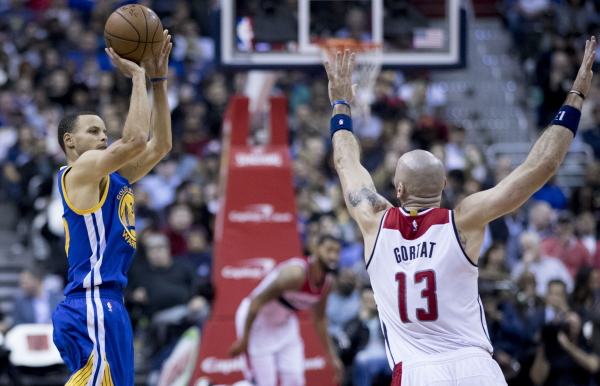 The all-time traveling championship standings across American professional basketball invite us to remember that it's not where you start, but where you finish.

Where these standings will finish, of course, no one knows. But we do know how they started. The Golden State Warriors, as the NBA champions for 2014-15, were given the traveling championship provisionally when we began tracking this title in 2015-16. The Warriors promptly made their title considerably more than provisional, winning their first 24 games of the season and making a cushion in the traveling championship that they maintain to this day.

Entering 2019-20, the Warriors hold 54 games of championship, 30 more than any other team. Even if we subtracted all 24 games of that first provisional defense, the Warriors still would lead these standings by a comfortable margin.

The next team on the list, the Miami Heat, has 24 wins. Then, the standings thicken up a bit. With 22 games of title, the Toronto Raptors are third, followed by the Clippers and Portland Trail Blazers, each with 20 wins. The San Antonio Spurs and Houston Rockets each have 18 victories in the four-year history of this championship through the 2018-19 season.

Following are the complete standings across the top level of American (and Canadian) pro basketball from the start of the 2015-16 season, when we began tracking, to the end of the 2018-19 season: 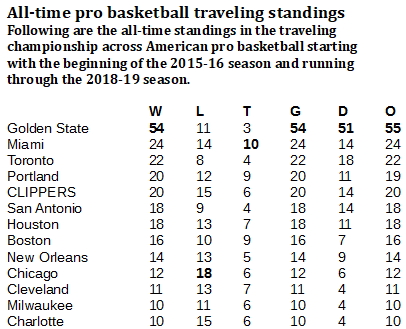 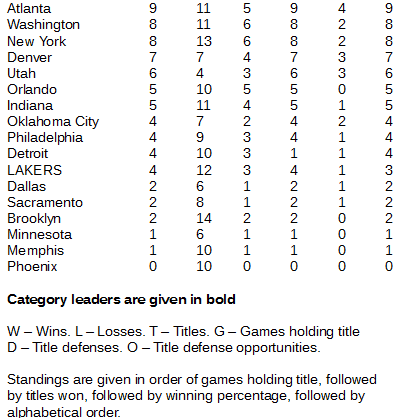 Only one NBA team hadn't yet won the league-wide traveling championship through its first four years. The Phoenix Suns failed in all 10 of their challenges. The Memphis Grizzlies and Minnesota Timberwolves each had one game of championship.

Of 30 teams in the NBA, only nine carried winning records for the traveling championship. Those would be the seven teams already mentioned, plus the next two on the all-time standings. The Boston Celtics are in eighth place with 16 wins, followed by the New Orleans Pelicans with 14.

In four years of running this championship, it went on the line 321 times through 2018-19, with the title changing hands 132 times. The average title lasted 2.43 games.

Starting the 2019-20 season, the Lakers took the early lead with four straight wins in November, but they now have been caught by the Rockets, who won it from the Clippers on November 11 and posted three defenses through Nov. 18. 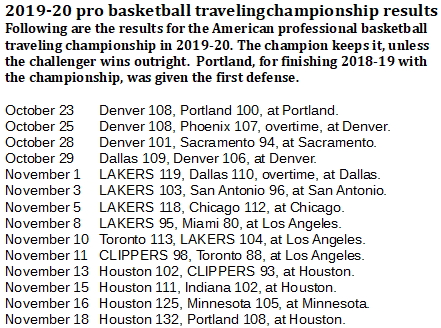