A very few teams dominate the long version of the men's college basketball traveling championship through four years. But that can change. Just, maybe, not quickly. The long version of the traveling championship across men's college basketball has been dominated by a handful of teams. But it's certainly not written in stone that it will remain that way.

And there is this upside: an interesting race. Villanova is the all-time leader now with 27 games of championship. But there's no telling when Villanova will ever see it again. Of all the American sports we follow in these pages, college basketball is, by far, the largest universe – 353 Division I teams in 2019-20.

There are a lot of places for this championship to go before any one team gets a crack at it. We've done this for four full years and only 90 teams have played for this long version of the men's basketball traveling championship. Only 27 teams have won it.

One outstanding indicator of which teams will be playing for the prize is, of course, which team holds the title around the time we change calendars. The college sports, compressing their conference schedules, end up playing almost all of their non-conference games before January. Once January arrives, the conference that has the title very likely is keeping it until at least the first round of the NCAA Tournament.

Once the tournaments begin, we know that the title will end up with the national championship, unless, of course, the regular season ends and the team holding the title doesn't even qualify for its conference tournament. That has yet to happen.

Following, now, are the all-time standings in this competition through its first four seasons, through the end of the 2018-19 campaign. This may take a while. Keep scrolling to find your team. 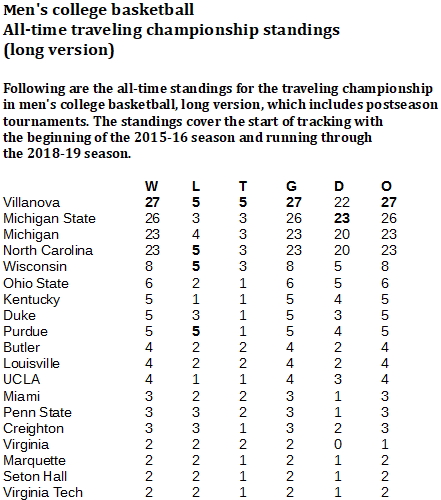 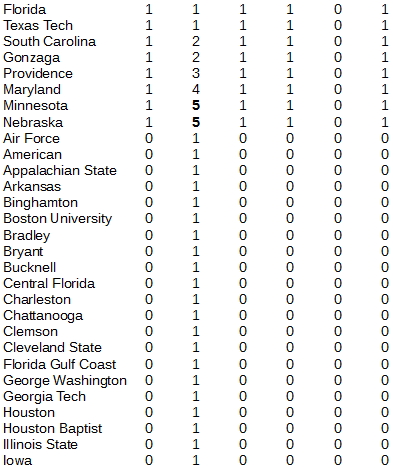 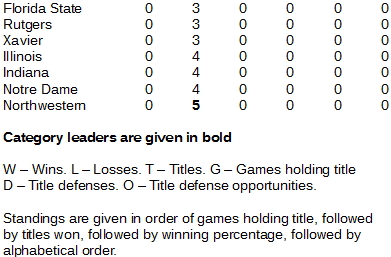 Virginia, winning the last NCAA Tournament with a title game victory against Texas Tech, brought the traveling championship into 2019-20 and has defended it four times, most recently a 61-55 home court win against Vermont on Nov. 18. The Cavaliers have their next two games at home against Massachusetts and Maine before they get tested on Dec. 4 at Purdue and on Dec. 8 at home against North Carolina.

The Tarheels capitalized on the prize living in the Atlantic Coast Conference (ACC) in 2015-16 and stand tied for third all-time with Michigan at 23 games of championship. Michigan State is second all-time at 26 games of title.

But once we get past that top four, the fifth-place team, Wisconsin, has only eight games of title.

Through the 2018-19 season, the long version traveling title went on the line 165 times, with the championship changing hands 44 times. Villanova has won the championship five times. No other team has won more than three. Michigan State is the all-time best team at defending the championship, succeeding in 23 of 26 attempts. 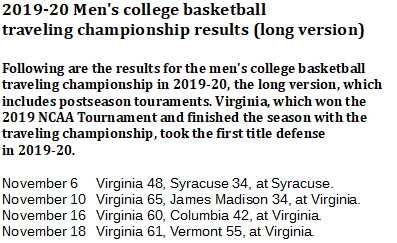