By legend, the people of Tyrone County (the O'Neills, specifically) were the first to Ireland. That's why Tyrone's football team is called the Red Hands. Get it? 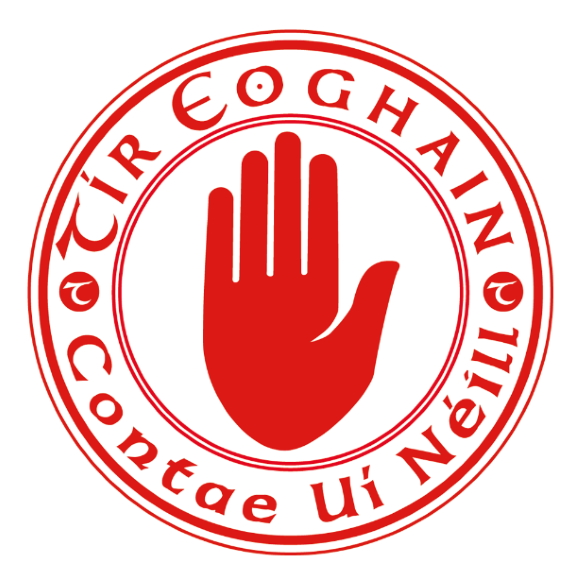 Gaelic football over in Ireland breaks its year into two parts, both long-lasting.

The Irish NFL is a real championship, but it is secondary. The real prize comes next, the All-Ireland County Championships, which begin in March and run into September. The Irish County Championships have been played continuously starting in 1887. Only the National League, baseball, US of A, has been around longer, since 1876. Just about every European league in any sport shut down during World Wars I and II.

For the purpose of tracking the traveling championship in Gaelic football, we follow the NFL and the All-Ireland, which is easy enough to do because all of the same county teams are in both. We began with the 2019 NFL season and gave the prize for safekeeping to Dublin, a traditional power that won the County Championship in 2018.

But the prize didn't stay very long with the Dubs, who lost their NFL opener to Monoghan. The championship kicked around through February. On March 2, Tyrone defeated Cavan and closed out its NFL season with two more wins. However, the Red Hands missed the NFL playoff, won by Mayo in a 20-16 decision over Kerry.

But Tyrone carried the traveling championship to the start of the County Championship in May, winning its first two matches there. Donegal finally knocked Tyrone off of a five-game championship, which no one could match. Donegal lasted but four games before falling to Mayo, which immediately fell to Dublin. So, the season ended with Dublin holding the title for three games, including a draw against Kerry in the County Championship final, then a win against Kerry in the deciding replay.

But Tyrone is the winner for the season, so we might as well explain why its team is called the Red Hands, for those who aren't O'Neills and don't already know.

Once upon a time, way back in the mists of history, legend has is that Celtic chieftains in many different boats were rowing across the North Atlantic when they spotted land. They couldn't agree about who could claim the land until they decided that it would go to whoever touched it first. So, the boats approached land and a warrior named Niáll came to realize he wasn't going to catch the front runner. Wisely, Niáll severed his left hand with a battle-axe, then threw the severed left hand ashore, thereby claiming the land for his descendants forever. The land is Ireland, in which the O'Neills (from uá Niáll) were dynastic, particularly in Tyrone, until about 1600. 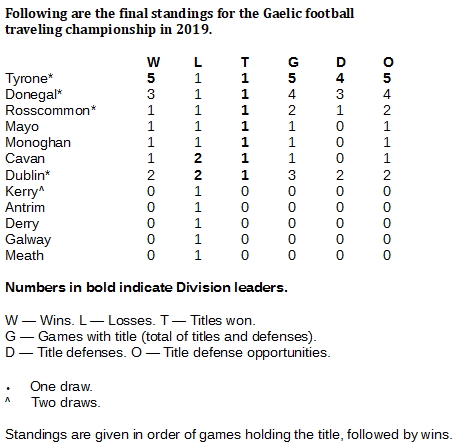