Kilkenny couldn't beat Galway for the championships of the National Camogie League or All-Ireland County Championship, but the Cats won enough for the traveling title in 2019. 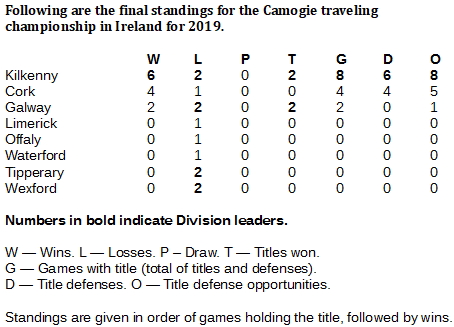 In the late1890s, the first generation of Irish women to attend college and vote was thinking long and hard about feminism and Irish nationalism.

One group of feminist nationalists envisioned that the next step toward emancipation and a fuller Irishness would be a game enabling women to develop athletic and interpersonal skills in a classless environment, a completely different window on life than rote female domesticity would allow.

Out of this came camogie, which is, in essence, hurling for women. Camogie comes to us as a self-consciously cultural and political initiative, with all of the tangled history one might imagine. Throughout the world today we will find about 100,000 registered camogie players, all but every single one of them either in Ireland or in Irish communities elsewhere.

In Ireland, the camogie team that made the dream come true in 2019 was Galway, which won the National Camogie League (NCL) season that ended on March 31, then captured the All-Ireland Senior Championship in September. Galway had never before won both championships during the same calendar year.

So far as the traveling championship through Irish camogie went, Galway won only two matches -- the NCL Final on March 31 (16-14 over Kilkenny) and the All-Ireland Final on Sept. 8 (23-17 over Kilkenny), both at Croke Park.

Those also were the only two losses suffered by Kilkenny in traveling title matches. With six wins to offset those losses, the Marble City squad outpointed Cork, which won four games. Starting the season as the provisional champion for winning the All-County championship in 2019, Cork reeled off four defenses before succumbing to Kilkenny in a 12-9 decision on March 10. 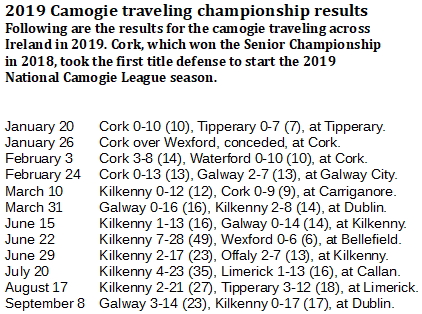