Four years into tracking a pyramid in women's professional basketball, the First Division has named four different champions. And so has the Second Division. 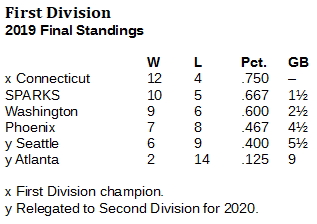 In four years of the pyramid in women's professional basketball, no dominant team has emerged. The Connecticut Suns became the fourth team to win the First Division championship in 2019.

The Second Division also has had four different champions. Along with constant changes in the championships, the promotion and relegation patterns here are spread as widely as possible. Out of a 12-team league, eight different teams have been promoted and eight have been demoted. Each team has changed divisions at least once.

At the end of 2019, four teams are changing divisions for the second time. The most newsworthy of these is the Minnesota Lynx, who won the First Division in its opening manifestation (2016) and finished one game behind the Sparks for that same title in 2017.

In 2018, the Lynx took a winning record into August, then lost their last four games in the First Division and slipped into relegation territory. But the Lynx made a reversal of those fortunes in 2019, winning their final five Second Division games and rallying to second place, thus securing their return to the First Division. 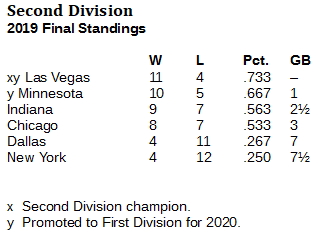 The Lynx finished one game behind the Las Vegas Aces, who began their history in this pyramid as the utterly futile San Antonio Stars. After finishing at the lowest bottom of the Second Division in 2016 and 2017, the franchise moved packed for Vegas, hired former Notre Dame and Detroit Pistons tough guy Bill Laimbeer to coach 'em up, and they have been on the rise.

The relegation zone in the First Division shows us, at the very bottom, an Atlanta Dream squad that clearly wasn't ready for this competition after being promoted for 2019. The Dream finished one-half game behind the Washington Mystics in the 2018 Second Division, but won only two of 16 games in the top tier and headed back down for 2020.

The other relegant is the defending First Division champion, the Seattle Storm, which won the 2018 First Division by a whopping three games, only to tumble in 2019 to 6-9, one game short of survival.