The top level of professional basketball is shaping up as a race between the Clippers and the Denver Nuggets, who have shot to the top of the First Division. 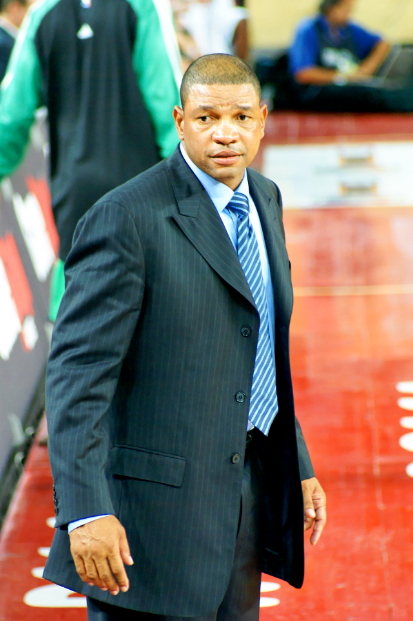 The race to the top of the First Division in pro basketball is shaping up as a two-team affair. The Denver Nuggets have the best record in the division at 9-2, but the 11-5 Clippers are almost right there.

That kind of finish calls for a split championship, but even if they don't split it, they are the only serious contenders right now for the First Division championship. The more interesting mix is down the standings. We're pretty sure the Golden State Warriors are going nowhere except for the relegation zone, but every other team is fighting simultaneously to win the championship and stave off relegation, and the top four in this tier will snag berths in the Elite Division for 2020-21.

The Oklahoma City Thunder, the third-place team in the First Division, is really on the fence, at once 2½ games off the championship and 2½ games off relegation. Everyone beneath the Thunder is closer to the gutter than to glory, including the Houston Rockets, San Antonio Spurs and Portland Trail Blazers. No one is safe.

That's good news for the Toronto Raptors, who are positioned at the moment for relegation with their 3-6 record. As the only Eastern team in the First Division, the Raptors have an unprecedentedly slim schedule here that will total 14 games. Adjusted winning percentage will tell in these decisions, so the few games Toronto plays weigh heavily. The Raptors have five left – two against Golden State, two against Denver and one against Houston. And it is a matter of more than passing interest, maybe, that we should note troubles against this smattering of top Western clubs for the Raptors, who are the defending NBA champions and the team with the second-best record in the Eastern Conference. 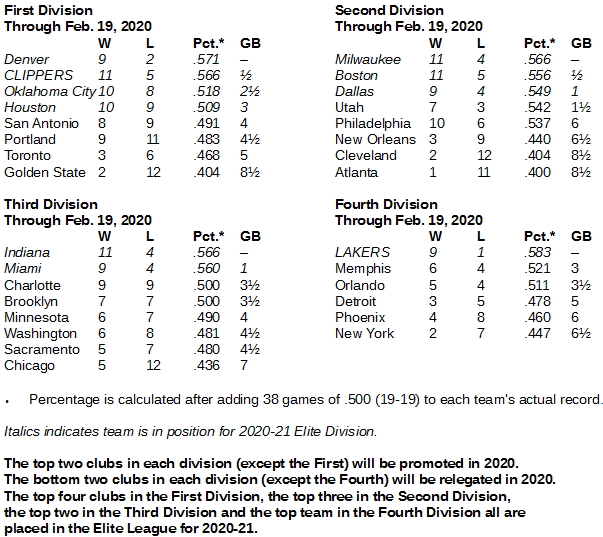 Following the new policy for the baseball pyramid and Elite Division, we weight these percentages. Because the NBA season is a smidge more than half as long as the MLB season, we weight the NBA a smidge more than half as much, with 38 games of .500, which means we add 19-19 to each team's record before calculating percentage. The discrepancies in basketball schedules amount to almost nothing compared with the discrepancies in baseball schedule, and yet it does make a difference. For example, it gives a team with a light schedule, like Toronto, a much better chance of escaping relegation.

And it makes a real difference in the Second Division. Coming out of the All-Star break, the Milwaukee Bucks led the Second Division, but they only were 1½ games ahead of the fifth-place team, the Philadelphia 76ers. In between, the scrum includes the Utah Jazz, the Dallas Mavericks and the Boston Celtics. The top two in this group are promoted to the First Division in 2020-21, while the top three will enter the Elite Division.

If we just went by straight percentages, Utah would be the second-place team here and Boston would be fourth. But adding 38 games of .500 brings the percentage column into alignment with the games column, which raised Boston to second and drops Utah to fourth.

At the bottom of the Second Division, three teams are trying to not be the two that will be assigned next year to the Third Division. The inside track for escaping relegation belongs to the New Orleans Pelicans, who are 3-9. The Pelicans still are two games better than the Cleveland Cavaliers (2-12) and the Atlanta Hawks (1-11).

The two best teams in the Third Division clearly are the Indiana Pacers and the Miami Heat. Both are going up to the Second Division and the Elite Division next year, barring disaster.

The rest of this group is just trying to grunt out this schedule and outrun the relegation carriage. The third-place team, the 9-9 Charlotte Hornets, is only one game ahead of the seventh-place Sacramento Kings, who are positioned for relegation at 5-7. In between them are the Brooklyn Nets and the Minnesota Timberwolves. One of these teams will be relegated, along with the Chicago Bulls, who have made a substantial down payment on next year's Fourth Division rent with a 5-12 record.

This is the fifth year for the pyramid across pro basketball. The Lakers began this history in the Fourth Division in 2015-16 and they've not only never gotten out, but they've been a poor Fourth Division club, 23-36 in four years of Fourth Division games entering 2019-20.

Hard to believe, but we have been living through the absolute lowest point in the history of the Lakers going all the way back to Minneapolis, 1948. From the end of 2012-13 through the 2018-19 season, the Lakers went six consecutive years without going to the playoffs. Among those six seasons were four of the five worst winning percentages in team history.

In the entire previous 65 years of the franchise's history, the Lakers had missed the playoffs a total of five times. Only once had they gone more than one year without entering the playoffs.

There is a cure for this in the NBA, and the Lakers usually have access to it. Just sign the best player in the league. So, LeBron James finally decided to play for his hometown team and signed with the Lakers.  Now, they've added Anthony Davis and they've got Dwight Howard and Rajon Rondo, older players who used to be stars most of the time and still get there some of the time.

The Lakers are 42-12 overall, best record in the NBA's Western Conference. Only four teams in Lakers history have played better than this team's .778 clip, and all of them won the NBA Finals.

Memphis and Orlando are close together for the second promotion out of the Fourth Division. No other team has a shot.