Once, Bayern Munich held a huge lead all-time in the German traveling soccer championship, but Borussia Dortmund has chipped away through the years and now is the all-time leader. 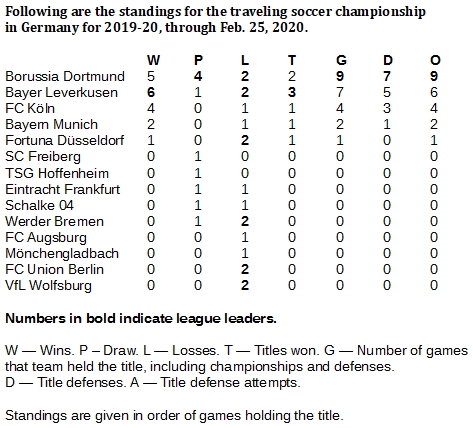 Borussia Dortmund has rallied in 2019-20 to surpass Bayern Munich in the all-time German lineal championship, scoring a seven-game title that bridged mid-September to early November.

The Dortmund squad now has 39 games of title in Germany since we began tracking the traveling title in 2015-16. Bayern Munich now is second all-time with 36 games.

We began this exercise with Bayern Munich as the provisional titleholder in 2015-16, a strong choice considering that the Bavarians have, as of this publication, won the Bundesliga seven straight times. Bayern immediately tacked up 15 games of championship. But Dortmund, Bayern's flustered second banana in German soccer, put in a pretty good showing that year, too, with 11 games of championship.

Bayern expanded its lead in 2016-17 with 10 games of title against only one for Dortmund, then the 2017-18 season saw Bayern end Dortmund's six-game title with a 6-0 drubbing in Munich before adding on five more games of title going into May. Bayern nosed out Dortmund that year, 9-8 in games of title.

In 2018-19, though, Bayern failed in its two challenges. The first was the key, a 3-2 loss at Dortmund, extending the Prussians' latest championship to six games. By the time the season was over, Dortmund picked up 10 games on Bayern Munich, coming to within four.

The Black and Yellow ("Die Schwarzgelben") produced its sixth title in our five years of tracking with a 4-0 home win against Bayer Leverkusen on Sept. 14 and began its march to the all-time lead. With a 2-2 draw at SC Freiberg on Oct. 5, Dortmund pulled even with Bayern at 34 games of title all-time. On Oct. 19, Dortmund moved ahead with a 1-0 win at Borussia Monchengladbach.

Two more defenses later, sitting on games 37 of title, Dortmund visited Bayern Munich. The result was typical. Bayern Munich walloped Dortmund, 4-0. In seven games between these clubs for the German traveling championship starting with 2015-16, Bayern Munich has won four, Dortmund two, there was one draw and Bayern has dominated in goal differential, 20-6.

Bayern's latest win also brought it to 35 games of title all-time with an opportunity to rally, surpass Dortmund in short order and, perhaps, even add some cushion. But this Munich title lasted only one more game before the Bavarians fell to Bayer Leverkusen, 2-1, in Munich, on Nov. 30.

Dortmund snatched the title for another two-game stretch a month ago, bringing its all-time total to 39 games of title and its total for the season to nine. That's good for the season lead right now, but Leverkusen is on seven and holds the title with its next defense coming March 1 at RB Leipzig (6:30 a.m. PST).

Leipzig is third all-time in Germany with 17 games of linear championship. Leverkusen has shot up to fourth at 15. Werder Bremen began the year with 13 games of title and the hot position, but inexplicably lost its opener to newly promoted Fortuna Düsseldorf and remains still at 13 games, fifth all-time.

While all of this is happening with the linear championship in Germany, the Bundesliga is as thick of a title race as we've in Europe for some time. With 23 games down and 11 to go, Bayern is barely on top with 49 points in the standings, followed by Leipzig (48), Dortmund (45), Borussia Mönchengladbach (43) and Leverkusen (43). 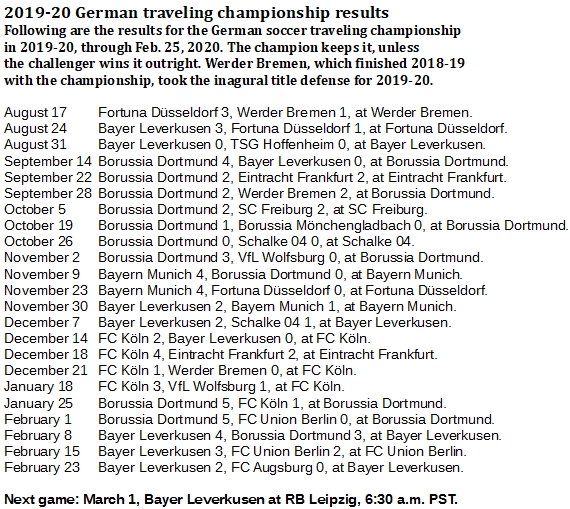