In 2019, Flamengo became only the second team in Brazilian history to win the Serie A, its state league and the Copa Libertadores in the same year. Flamengo also won the Brazilian Big Six for the second straight year. 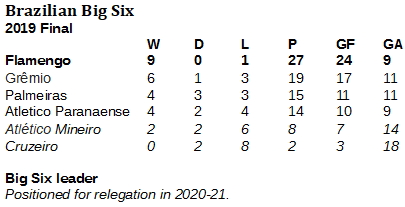 Rubro-Negro won the Serie A in 2019 by a landslide after finishing a close second in 2018. The club also won the Brazilian Big Six for the second straight year. Flamengo became the second club in Brazilian history in 2019 to win the Serie A, the Copa Libertadores and its state league, the Carioca.

In 2018, when Palmeiras won the Serie A with 80 points, Flamengo came in with 72. But Flamengo topped Palmeiras by a game in the Brazilian Big Six.

In 2019, Flamengo flew through the Brazilian top tier with nine wins in 10 games for 27 standings points out of a possible 30. Grêmio came in a distant second place at 19. Grêmio and Palmeiras again vied for second place, with Grêmio prevailing this time.

At the bottom of the tier, Cruzeiro lost eight out of 10 and Atlético Mineiro only won two of ten, each securing relegation to the Brazilian Middle Six in 2020.

In the Middle Six, the dominant clubs were São Paulo and Santos. Sao Paulo has completed the climb up the ladder in two years, finishing second in the Brazilian Little Six in 2018 and tying with Santos at the top of the Middle Six this time with 19 points in the standings. São Paulo is going to the Big Six in 2020, as well as Santos, which had just been demoted from the top tier this year. 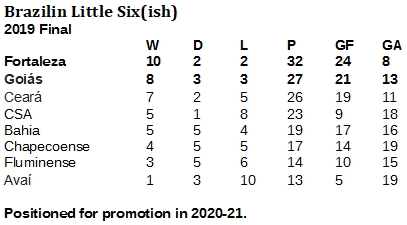 The big winners in the Brazilian Little Six were newcomers Fortaleza and Goiás, who are moving up to the middle rung in 2020. Fortaleza dominated here with only two losses in 14 games, clearly the championship club with 32 points. In the Serie A, Fortaleza finished ninth out of 20 clubs.