Lazio lays into 10-game title for linear lead in Italy

As popularity goes among the top Roman soccer clubs, Lazio is second to AS Roma. But Lazio is making a bid this year to unseat Juventus as the Serie A champions, and the Eagles are chugging through the traveling championship pretty well, too. 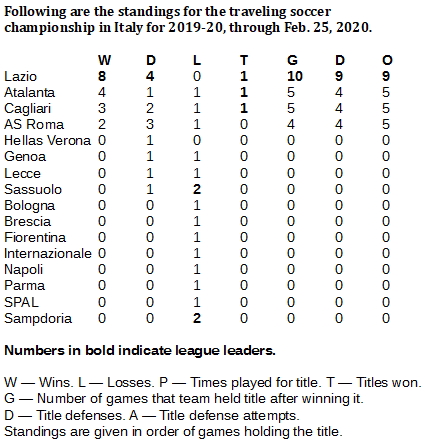 Lazio, the second soccer club in Rome, has played for 90 years in Serie A and only won it twice.

So, there is scepticism concerning whether Lazio can actually pull it off this year. At this moment, the Eagles are right there, second place, 59 points in the Serie A standings, a mere one point behind eight-time defending champion Juventus.

Lazio is the most surprising contender in Europe this year, which is saying something because, these days, it's surprising when anyone challenges the likes of Juventus, Paris-Saint Germain, Bayern Munich or the two leading Spanish clubs.

But Lazio is doing it, and putting together a pretty impressive run with the Italian traveling soccer championship. Lazio's 10-game title is current, including eight wins and two draws. The next challenge will take place at home on Feb. 29 against a Bologna squad that is right in the middle of Serie A.

Lazio and Juventus will meet again on April 26 in Turin, nine games down the road for the traveling champions. Can Lazio hang in there long enough to make that game really count? Though Lazio is the upstart this year and Juventus is the perennial power, the Roman side has prevailed strongly in their two meetings so far, a Serie A game in Rome on Dec. 7 and the Italian Super Cup in Saudi Arabia on Dec. 22, each by 3-1.

Lazio won the linear title on Dec. 16 with a 2-1 win at Cagliari. Before that game, the Eagles had failed all eight of their challenges for the prize going back to the start of tracking in 2015-16, losing six of them. On this new winning streak, Lazio has outscored its opposition 22-8.

Somehow, the Serie A has kept Juventus away from a title shot this year. But Juve remains well ahead of every other Italian club with 73 games of domestic linear championship. Napoli remains second at 26, losing all three of its challenges in the last two seasons. AS Roma has added four games of title this year and now stands third with 20. 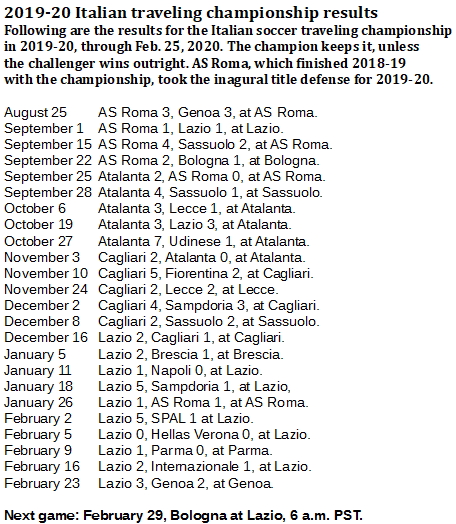