Liverpool is shooting for the all-time English record for most consecutive domestic league games without a loss. Included in the Reds ongoing streak are six wins in as many outings against the English Big Six in 2019-20. 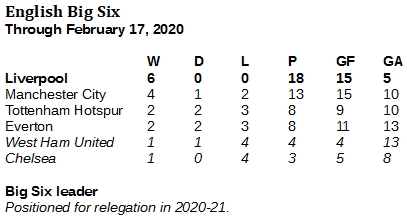 Liverpool has gone 43 consecutive games without losing in the English Premiership, approaching the record of 49 set by Arsenal in 2003-04.

Through 26 games, it's 25 wins and a draw for Liverpool. No one is beating them, not even in the English Big Six, where the Reds have won all six of their game and appear poised to knock Manchester City off the perch it held the first two seasons of the internal pyramids.

Liverpool is newly promoted to the Big Six after being demoted from it following the 2017-18 season.

City, which thoroughly dominated the first two years of the Big Six, remains a strong second-place club, but only in the sense that it is well ahead of the two third-place clubs. At the bottom of this group, West Ham United and Chelsea are ticketed to the Middle Six in 2020 if they don't rally. 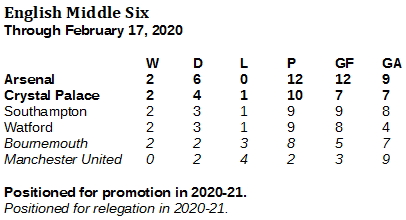 Nobody wants to win in the Middle Six this year. The top club is the one that simply doesn't lose. That would be Arsenal, which has fought to draws in six of its eight games, which, paired with two wins, put the Gunners in first place.

Remarkably, we find Manchester United facing almost certain relegation to the Little Six(ish) in 2020. United has failed to win a Middle Six game in six tries. 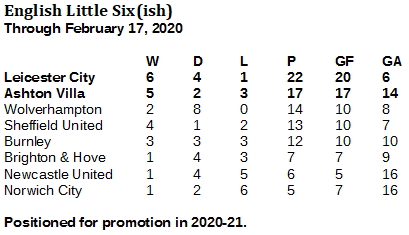