The Washington Mystics took their second consecutive Team of the Year designation in women's professional basketball in 2019 when they smashed the Sparks for the traveling prize and kept winning for the rest of the season. 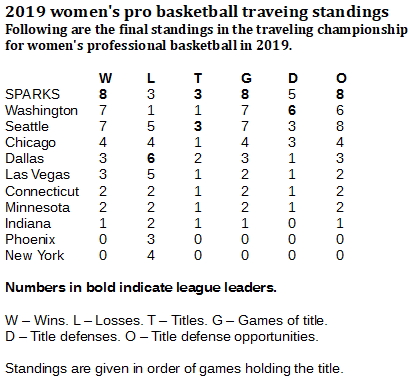 Approaching the end of August, the Sparks appeared to be the hands-down pick for Team of the Year in the women's pro basketball traveling championship for 2019. The Sparks already had eight games of championship and they had been clearly better in this series than the runner-up at that point, Seattle.

But when the Sparks went to Washington on Aug. 27, all of that began to change. The Mystics annihilated the Sparks, 95-66, then went on to six consecutive defenses, including two rounds of playoffs through the WNBA Finals.

In the end, Washington counted seven games of championship (each playoff round counts as one game), one short of the Sparks.

However, in view of the fact that the Mystics won out, survived those playoff rounds and clobbered the Sparks to take the crown in the first place, we're giving Team of the Year to Washington, and this would be the second consecutive such designation for the Mystics.

Through four years of tracking the traveling championship through women's pro basketball, the Mystics are the second team to win season honors twice. The Minnesota Lynx won that designation in the first two years of tracking, 2016 and 2017. 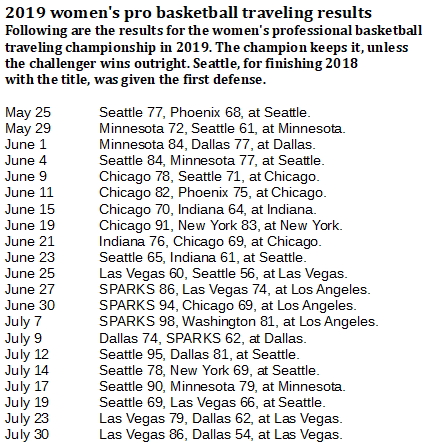 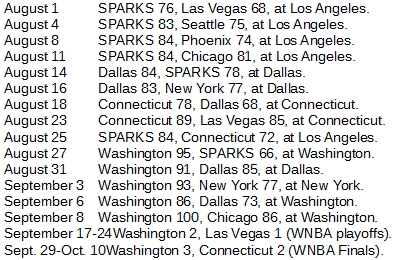