Louisiana State's history with the traveling college football championship isn't close to the glory of Ohio State, but LSU holds the title at the end of its 41st season. 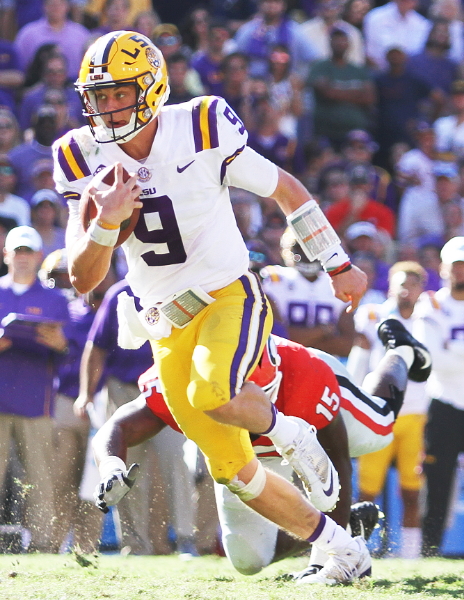 Ohio State wasn't claiming victory coming out of the 2019 college football season. The Buckeyes, always with eyes on the national championship, bowed out of the national semifinals with a 29-23 loss against Clemson.

But the Buckeyes staked out their place among the elite historic programs in the traveling championship, which wrapped up its 41st season in the possession of Louisiana State. Ohio State rang up 12 games of title in 2019 before falling to Clemson. Straight away, LSU snatched the prize from Clemson in the national championship game, a 42-25 win.

Clemson now is 18-7 in its lifetime endeavors with the traveling championship, cut short without a defense by an LSU outfit that now is 9-7 all-time for the linear title.

LSU failed in its first three challenges for the traveling championship before taking it for the first time on Oct. 3, 1987, with a 13-10 win at home against Florida.

The 1987 season was the first for LSU under Mike Archer in relief of Bill Arnsparger as head coach. After winning their first traveling title, the Tigers defended it at home against Kentucky and on the road against Georgia and Alabama, bringing themselves up to No. 5 in the AP poll. Then Alabama, ranked 13th, came to LSU and won, 22-10, for its second one-game championship in 1987.

The two leading offensive players for that LSU team were underclassmen, junior quarterback Tommy Hodson and sophomore running back Harvey Williams. Yet, LSU didn't get better in the ensuing years and actually declined to the extent that Archer was out after four seasons, to be replaced by the even less successful Curley Hallman.

It would be 20 more years before LSU received another chance to challenge for the traveling championship, and the Tigers met the challenge with an outstanding team, the 2007 national champions, in fact. Everyone knew this team had it. The Tigers were ranked No. 2 preseason and finished 12-2, both losses coming in triple-overtime. They rose to No. 1 and fell again twice before reaching the top for the third time with a 38-24 win against Ohio State in the BCS National Championship Game, played at the Superdome in New Orleans.

One of those dips in the season came on Oct. 13, when the top-ranked Tigers fell to Kentucky on the road, a 43-37 triple-overtime loss. The next week, Auburn visited LSU with a three-game traveling championship, which LSU then claimed with a 30-24 win. LSU defended that title at Alabama and Mississippi, and also at home against Louisiana Tech. But unranked Arkansas visited LSU, now back on top of the rankings, on Nov. 23. The result was spectacular, a 50-48 win for Arkansas in triple-overtime.

LSU recovered, much due to the unique circumstances of 2007, when being No. 1 was dangerous, but being No. 2 was fatal. Seven times in the last nine weeks of the season, the No. 2 team lost. The very week LSU lost to Arkansas, No. 2 Kansas lost to No. 3 Missouri. LSU fell from No. 1 to No. 7 in the next BCS rankings, seemingly with no path back to the top with the conference championship games coming right up.

But more carnage ensued at the top of the rankings following the next week's games. Oklahoma destroyed the new No. 1 team, Missouri, 38-17, in the Big 12 Championship Game. The new No. 2 team, West Virginia, with a spot in the national championship game on the line, somehow couldn't gear up for the 100th anniversary of its backyard rivalry against a Pittsburgh team that entered 3-7 and lost, 13-9. Hard to imagine a more disappointing loss for a football team. The No. 3 team, Ohio State, did not play, and neither did the new No. 4 team, Georgia, nor the new No. 5 team Kansas. At No. 6, Virginia Tech posted a convincing win in the ACC Championship Game, 30-16 over Boston College. And, at No. 7, LSU held off Tennessee, 21-14, in the SEC Championship Game.

Out of all this, LSU somehow rose from No. 7 to No. 2, securing a spot in the national championship game against Ohio State. And the selection of LSU, though controversial, was vindicated when the Tigers thumped the Buckeyes, 38-24, in the Superdome.