Santos Laguna is going for its third straight title in the Mexican Little Six, the Mexican Middle Six and the Mexican Big Six, consecutively. 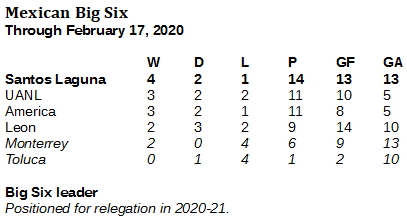 Santos Laguna has put itself into a position for an unprecedented triple with two huge Mexican Big Six wins during the first weeks of the Clausura.

The break after the Apertura came with UANL undefeated in the Big Six, but that changed quickly with the new year, which brought losses against Santos and América. Santos added a win against León, moving into first place with 14 standings points and only one loss in seven games. América and UANL both are a full win behind.

Santos began this exercise in 2017-18 in the Little Six and won that level before winning the Middle Six in 2018-19. If Santo wins the Big Six this year, it will be the only team to win the Little Six, Middle Six and Big Six consecutively in the three years we have run the internal pyramids.

Monterrey, which won the Mexican Big Six in 2017-18, faces relegation if it can't rally from its fifth-place status. There appears no chance that Toluca, still with only one point in the standings, can come off the mat. 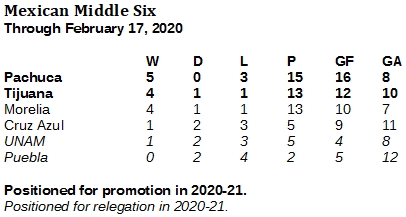 A good three-way race has shaped up for the two spots in the Mexican Middle Six that ticket promotion to the Big Six. Pachuca leads the pack now with 15 points, but that's only two points ahead of Tijuana and Morelia, who each have two games at hand on the leaders. Pachuca still leads despite losing two of three in the Middle Six during the Clausura.

The race to the bottom of the middle is led by Puebla, which has no wins and two draws in six games. Cruz Azul and UNAM both are slightly better positioned to stave off relegation. 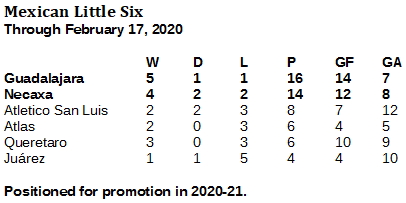 Guadalajara and Necaxa, both demoted to the Little Six this season, clearly are the two best teams at this level and they are strongly positioned for a return to the Middle Six in 2020-21. Guadalajara has 16 standings points, Necaxa has 14, and no one else has more than eight.