Shakhtar Donetsk compiled 13 games of championship in the European and world travelers, ending with its Champions League rematch with Atalanta in December. Now, Sassuolo holds the titles after holding off AS Roma at the start of February. 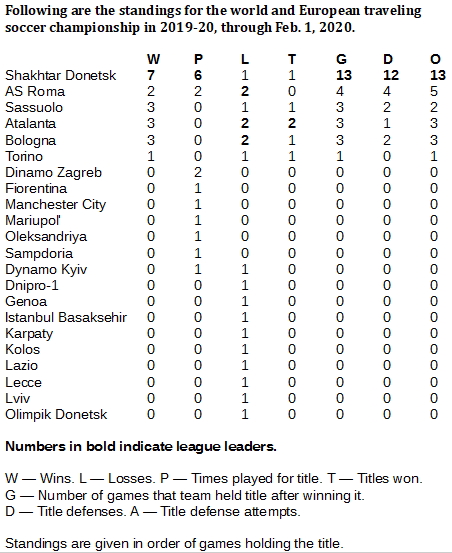 When last we left the European and International traveling soccer championships, the Ukranian club Shakhtar Donetsk was at the start of what proved to be an impressive run of titles for a club that's not from a more western location.

But Shakhtar put together an especially good streak, 13 games of championship in each case (the European and International lineals have been stuck together now for more than two seasons). Included in Shakhtar's run of titles were three defenses in the Champions League, including two draws against the Croatian side Dinamo Zagreb and another draw at Manchester City.

Finally, though, Atalanta got its rematch. The Goddess dropped the prizes to Shakhtar on her home ground on Oct. 1. On Dec. 11, they met again, in Kharkiv. This time, the Italian squad put a 3-0 drubbing on the Ukrainians, sending the titles back to Italy.

No club since then has assembled a championship longer than three games, which is the Sassuolo's current championship. Sassuolo held on with an upset win, 4-2 at home against AS Roma, which brought both championships into the current season.

Barcelona remains the leader all-time with 36 wins in the world competition, but Roma is second at 23. In Europe, Real Madrid has the all-time lead with 44 games of title, followed by Roma with 23. 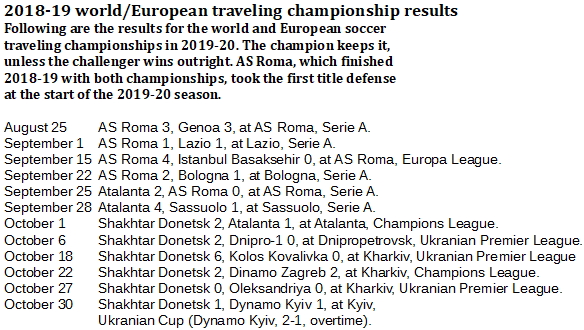