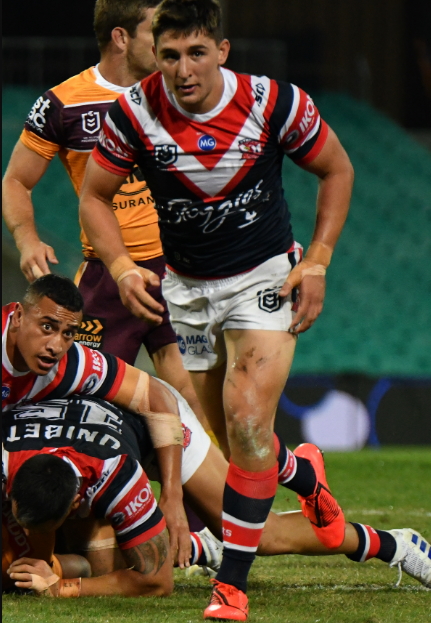 So, let's suppose its 2020 and you're revving up a big-time sports league in Australia. The immediate question of where to put the teams begins by answering itself naturally.

You would start with the two biggest towns, Sydney and Melbourne. Sydney, with a metropolitan area of 5.2 million (per the Australian Bureau of Statistics), is historically the larger of them. But Melbourne, at just fewer than five million, is growing faster and projected to surpass Sydney some time around mid-century. In the American rankings, they would be the 10th and 11th largest metros, between Atlanta and Boston. They are big-league big markets, big enough to support a team in every major US league (except, of course, that they're in Australia!).

Australia has two other metros at right above two million people, plenty enough to do some big-time sports on an American scale. Brisbane, the capital of Queensland, is up the east coast from Sydney with about 2.5 million people in its metro. Perth is the only big town on the West Coast, but it is becoming big quickly, growing about 25 percent from 2006 to 2016 and nudging past two million people. They're about the same size as a three-team US market like Pittsburgh, or two-team markets like Kansas City and Cincinnati, or one-team markets like Portland, Sacramento, San Antonio and Columbus. The remaining obvious market would be Adelaide, the capital of South Australia, at around 1.4 million people, comparable with one-team US markets like Oklahoma City, Raleigh or Memphis.

Put two teams each in Sydney and Melbourne, then give each of these other metros one, and you have seven teams. Of course, it's going to work better with eight teams. And you do have options. Which options a league pursues toward filling its dance card up to eight or 10 teams is one way to differentiate itself.

One place to look is the national capital, Canberra, but it is only a market of about 450,000. In American professional baseball, that's a Class AA market, about the size of Corpus Christi or Huntsville. But it is the capital of Australia, and the Australian Baseball League (ABL) is there. So is every kind of rugby competition, including the National Rugby League (NRL, rugby league), Super Rugby (the Southern Hemisphere rugby union blowout) and National Rugby Championship (NRC, the national rugby union competition).

Instead, Big Bash put its eighth club in Hobart, capital of the island state Tasmania. Needing an eighth franchise, NRC picked Fiji. A path more often taken is New Zealand. The ABL and NRC each have teams in Auckland, which boasts a metro of about 1.6 million, about the size of a two-team market like Milwaukee, a one-team market like Jacksonville or a no-team market like Providence. The A-League, the top soccer league in Australia, places its New Zealand entry in Wellington, the national capital, but a market of only about 420,000 (think Reading or Mobile).

Anyway, it's fun to play Sim City, but these enterprises weren't always so evenly planned.

So, right now, it's summer in Australia. The top pro leagues in baseball, basketball, cricket and soccer are all playing. All of these leagues have pretty well distributed their teams around Australia, as if it all were planned out.

But February brings a split. A few of them, actually, because rugby season begins. And where to begin? Begin with the split between rugby union and rugby league. Rugby union is the original version. Rugby league actually began as a break-away faction of teams that wanted allowances for professionalism and later made rules changes for a lighter, more fluid game.

Rugby union is the version found most commonly and easily around the world. Australia's major rugby union competition actually is international, Super Rugby, featuring four teams from Australia, five from New Zealand, four from South Africa, one from Argentina and one from Japan. The Australian teams are in Sydney, Melbourne, Brisbane and Canberra.

When the Super Rugby season ends in August, rugby union slides into the Australian domestic league, the NRC. As noted, the NRC teams are located mostly as the big markets would predict. In truth, though, judging only by the turnstile, rugby union isn't nearly as popular in Australia as rugby league.

It happens that rugby league developed in Sydney and New South Wales, but it had little influence 545 miles to the south in the nation's other big town, Melbourne. There, a different game took hold, known today as Australian rules football. And that game apparently had little impact in Sydney.

That's what the league histories tell us, anyway.

It would seem that if you put restrictions on the team advancing the ball, then less violence is needed to restrict that team's advance and bring about some tension and resolution about who gets the ball. The most extreme and popular way of doing it is association football, soccer, in which players are not allowed to touch the ball with their hands and defenders, then, are not allowed to maul offensive players. The players wear tees and shorts. The other extreme, also quite popular, is American football, in which offensive players have all but complete freedom to advance the ball by heaving it downfield to a pass catcher or running with the ball in hand. To stop this, defenders are given permission to obliterate the ball carrier. All of the players are heavily padded.

In between are dozens of different codes developed by this or that grammar school or university, maybe by this or that private athletic club. By the mid-19th century in Australia, lots of them had been introduced. But a peculiar wrinkle took off in Melbourne, where they liked allowing players to pass or kick the ball forward. Meanwhile, in Sydney, rugby union remained the leading game until a split in Australia produced rugby league in 1908.

It would seem that Melburnians never developed a taste for rugby league, because they had their own game now, which also was spreading to Western Australia and South Australia. The state league in Victoria, the Victoria Football League, launched in 1896 and became easily the largest of the state leagues playing the Australian game. In 1990, the VFL renamed itself the Australian Football League and went national.

But it didn't go that national. Of 18 clubs in the AFL, nine of them are in Melbourne. Another Victorian club is in Geelong. Two more clubs are in Queensland (one each in Brisbane and Carrara), two are in South Australia (both Adelaide), two are in Western Australia (both Perth) and two are in New South Wales (both Sydney). One of the Sydney clubs, Sydney Swans, moved in from Melbourne in 1982, becoming the first club in the VFL to operate outside of Victoria. The other, Greater Western Sydney, was established in 2009.

Sydney was doing something else this whole time.

The National Rugby League has its origins in the New South Wales Rugby League, established in 1908. The league's two most decorated franchises, Sydney Roosters and South Sydney Rabbitohs, originated with that league in 1908. Through time, the league expanded outside of Sydney and out into New South Wales. But it wasn't until the possibility of a truly national rugby league was taken seriously that the league placed a team in Melbourne. That was 1997.

To this day, the NRL has 10 of its 16 clubs in New South Wales. Eight of its clubs are right in Sydney. A ninth, St George Illawarra Dragons, is half in Sydney and half in Wollongong. Three teams are in Queensland, one is in New Zealand, one is in Canberra and one -- just one! -- is in Melbourne. Also worth noting is that no NRL teams are in South Australia or Western Australia, where the Australian rules game dominates. But there is no Aussie rules team in Canberra or New Zealand, where rugby league is present.

So, if you made it this far through our meandering verbiage ... Thanks! About the Southern Hemisphere traveling championship in rugby league, which this piece is supposed to describe in some detail, the nod for the year goes to Sydney Roosters, who produced 10 games of championship in a 26-game season.

Sydney began this first season of the lineal title in Southern Hemisphere rugby league as the caretaking champion and immediately dropped it to South Sydney Rabbitohs (a "rabbitoh" is simply a rabbit) on the first day of the season. The Rabbitohs held the title for three games before giving it up. Sydney later produced title runs of three, four and three games, including a Grand Final victory over Canberra, 14-6, at Stadium Australia in Sydney, which was built to be the main athletic venue for the 2000 Olympic Games. 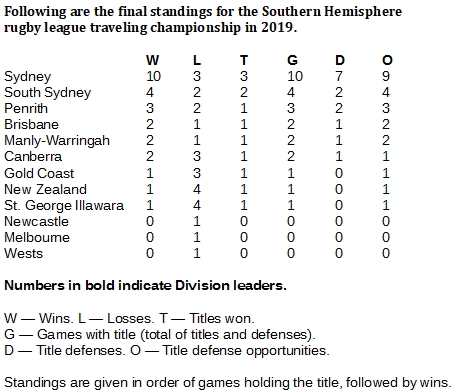 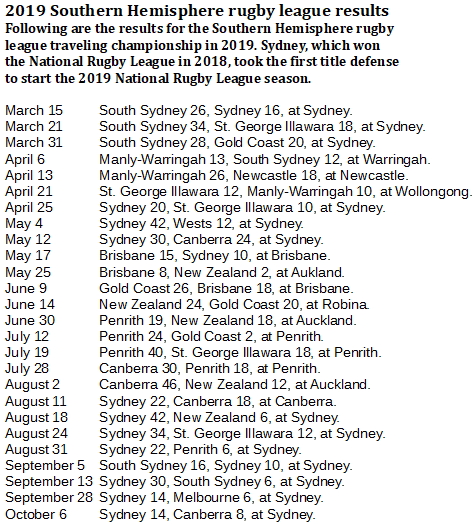