In five years of tracking the lineal championship through top-level Spanish soccer, we have seen very long ebbs and flows, all involving the two giants in this nation of leading clubs, Barcelona and Real Madrid. 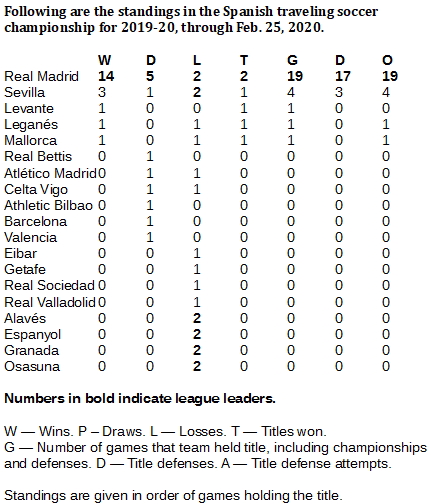 The two top soccer clubs in Spain, Barcelona and Real Madrid, continue waging a furious battle for the all-time lead in the domestic traveling championship. No matter how far ahead one gets, the other comes raging back.

But Barcelona came back with a record-setting performance in 2017-18, holding the championship for 36 games out of a 38-game season. No other pro soccer club has accomplished anything close, so far as these pages have seen, though Liverpool is making a bid to meet or exceed that performance this year in England.

Real Madrid's rally in 2019-20 has made the race close again and it could have gotten closer. The whites just now lost the championship in a 1-0 upset loss at Levante on Feb. 22. Levante will put the title on the line Feb. 29 at Eibar (4 a.m. PST).

As for the race in La Liga this season, it's what one always expects. First place, Barcelona, 55 points. Second place, Real, 53 points. No one else has more than 43 points, meaning everyone else is a full four games or more off the pace. 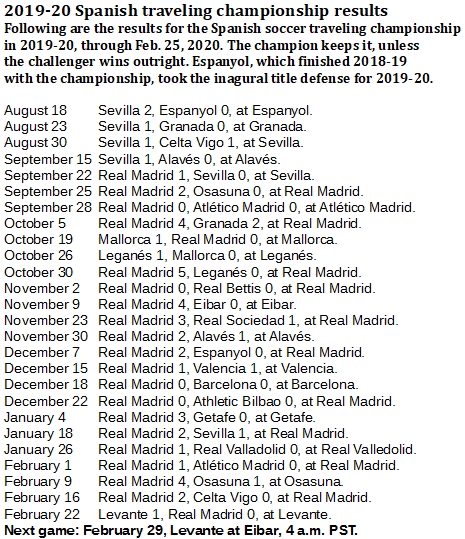