UConn down but definitely not out for women's long traveler

Even since its dominant run with the women's college basketball traveling championship has ended, Connecticut remains a strong player for the title. But the results this year have not shown it. 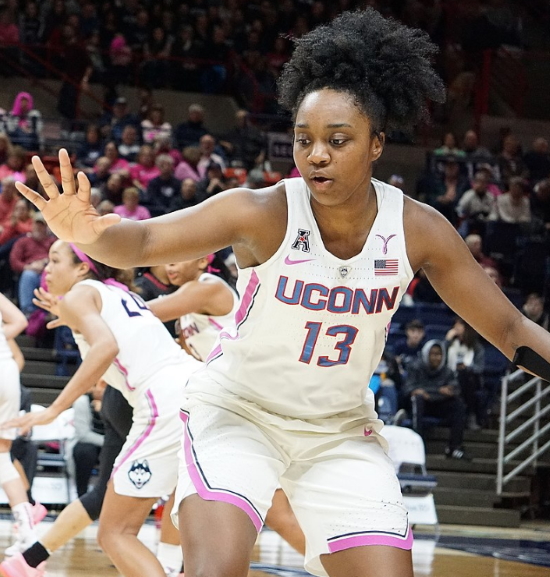 When we began tracking the women's college basketball traveling championship with the 2015-16 season, Connecticut was in the middle of its historically dominant run through the sport.

The Huskies already had won 38 consecutive games and three straight national championships. They were the only choice to be the caretaking lineal champion. And they ratified that choice with 73 straight wins from the start of the 2015-16 season until March 31, 2017, when a buzzer-beater brought them down to a 66-64 loss to Mississippi State in the national semifinals.

From the moment when Connecticut finally lost, this competition took on a new look. Connecticut was set in the lead at 73 games of championship. What would come next?

What has happened since then is that the Huskies still are about as good as anyone. They're not a top-down, lead-pipe cinch to win every game, but you probably wouldn't bet against them. Then again, if you had bet against them this year when they played Baylor, Oregon and South Carolina, you would have won, even giving away a lot of points.

The 2019-20 season has brought some difficult, historic losses on UConn. On Jan. 9, it played No. 6 Baylor again, this time in Hartford, and lost, 74-58, ending UConn's 98-game homecourt winning streak. On Feb. 3, third-ranked Oregon visited and thumped the Huskies, 74-56, in Gampel Pavilion, the campus home where they had never lost that badly and where they hadn't lost at all in seven years. Now, the Huskies have lost twice at home for the first time since 2013.

On Feb. 10, the Huskies traveled to Columbia, SC, to take on the new lead team and traveling champion in women's college basketball, South Carolina. And UConn didn't even come close in a 70-52 loss. It was UConn's first loss in three attempts as a linear title challenger.

Despite its recent foibles, Connecticut has remained a force in this championship since finally losing that provisional title at the 2017 Final Four. The first time UConn got to challenge for the championship, it took down Notre Dame at home, 80-71, on Dec. 3, 2017, then held the title for 29 more games before the Irish took it back with a 91-89 win in the national semifinals.

So, Notre Dame held the title going to 2018-19, and UConn got another challenge against the Irish on Dec 2, 2018, coming out of it with an 89-71 win and its second earned traveling championship. UConn held that title for five games before the loss at Baylor in January 2019, and hasn't held it since.

As we look at the all-time standings today, then, UConn is well on top with 108 games of championship since we began this at the start of 2015-16. From the moment when UConn first lost, though, this has become quite an interesting race.

That's what the other programs in women's college basketball have done with the traveling championship at the 2017 Final Four, when UConn finally lost it. What has UConn done with it since then? Not bad. Two championships and 33 games of defense, for a total of 35 games. They're right there with anyone since they have become merely beatable.

So, this isn't a year when you're thinking UConn will win the national title. The Huskies have absolutely been handled this year by Baylor, Oregon and South Carolina. But the Huskies still are right there. They'll go to the NCAA Tournament again and win a couple of rounds easily. Once we get into the Sweet 16, though, we could actually have a deep, competitive tournament, and the traveling championship will go right along with it. 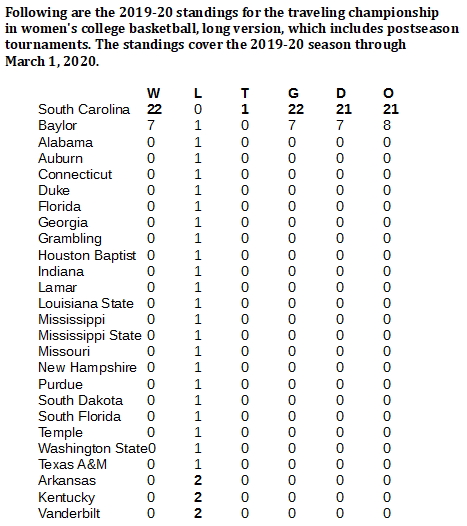 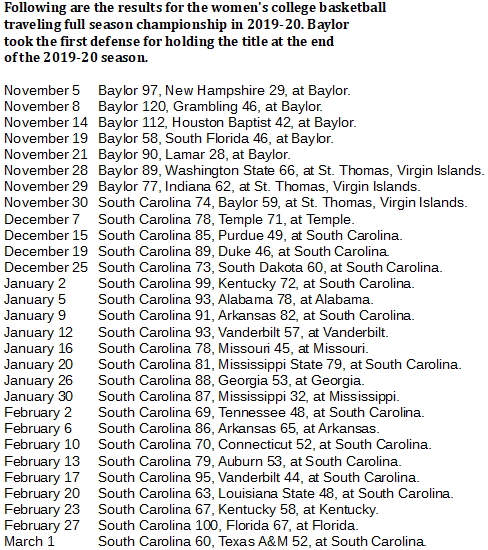