Winning the NCAA Championship in men's basketball means taking the long lineal title to the next season. Thus, Virginia sprinted out to seven games of title defense in 2019-20 and still has the lead. But UCLA has the title now, three games down with the regular season still not done. 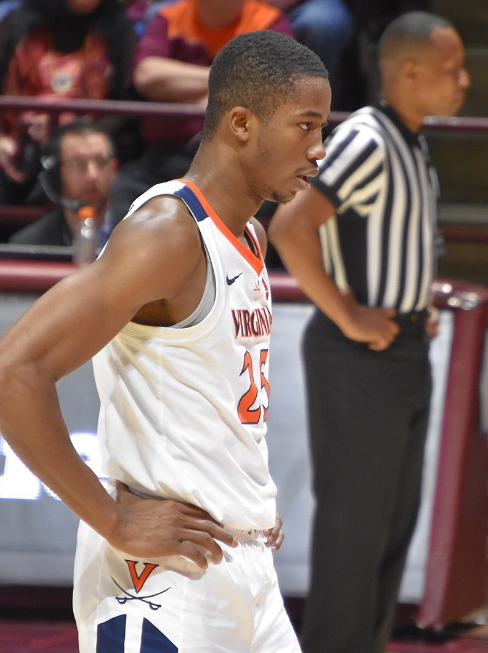 Mamadi Diakite is one of only three seniors trying to defend the men's college basketball championship this season with the Virginia Cavaliers (SneakinDeacon/Creative Commons Attribution-Share Alike 2.0 Generic license).

The long version of the men's college basketball traveling championship is touring the Pac-12 this season, and the results are about as one would expect.

The Pac-12 is an even league in which every team went to Feb. 29 with at least five losses in the league and six teams were within two games of the top. Now that the weekend of games has played out, three teams still have a chance to at least tie for the title. The most likely outcome is that Oregon and UCLA will tie in the end, and Oregon won their head-to-head match, 96-75, in Eugene on Jan. 26. No other league was that close.

The Big Ten had five teams within two games of the top, but that's close as anyone got to league-leading Maryland until Michigan State dropped the Terps, 78-66, in College Park on Feb. 29. Now, Maryland is 13-5 in the league with two games left. But Michigan State, Illinois all are within a game at 12-6, while Iowa and Penn State both are two down at 11-7

But the Pac-12 has a thick one going, too. UCLA is on top at 12-5 with one game left coming up Saturday at Galen Center against Southern Cal. Oregon 11-5 with the NoCal teams, Stanford and Cal, visiting Eugene this weekend. Arizona State has an outside chance to tie for the title at 10-6.

The Pac-12 is not a league in which anyone is going on long winning streaks. And, considering that the traveling prize had only briefly before been in UCLA's possession among all the Pac-12 teams, this first dip into an even league wasn't going to produce an immediate threat to the crown. Villanova's all-time leading 27 games of championship was in no jeopardy once the title entered the Pac-12.

Arizona State is the biggest winner this year among the Pac-12 teams with six games of championship, not even enough to dislodge Virginia from the lead after the defending national champions began 2019-20 with seven traveling title defenses.

In December, the championship went on a little tour through four teams and three conferences. Purdue smashed the Cavaliers, 69-40, on Dec. 4 in West Lafayette, IN. After one defense, though, Purdue dropped the title to Nebraska, which immediately fell to North Dakota.

If the Fighting Hawks could have defended the title just one time, they would have taken it into the Summit League, where the leading teams this year are South Dakota State and North Dakota State. But North Dakota lost that opportunity, 83-66 at Oregon State on Dec. 29, and the traveling title was headed to the West Coast.

In five years of following this championship, only once has the lineal title started the year in some conference and remained there when the conference portion of the season began in January. That was 2016-17, when Villanova began as the defending national champs and took down every foe in its pre-conference slate, which really wasn't saying much. But no one else has done it. The prize stayed in the Big East all the way until the second round of the NCAA Tournament, when Wisconsin took down Villanova, 65-62, for a Sweet 16 berth.

At the top of the all-time traveling standings, this makes for no real differences. Among the leaders, Purdue and UCLA have each picked up a couple of games and moved up to seven each, which is sixth on the all-time list going back to 2015-16. UCLA will continue adding to its total, though, as long as it keeps winning, and there's still a lot of basketball left in this championship, which goes all the way to the national championship game. 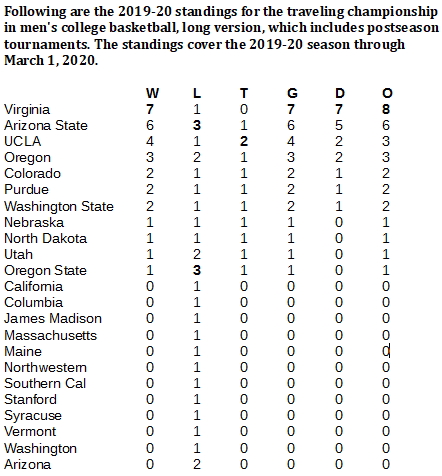 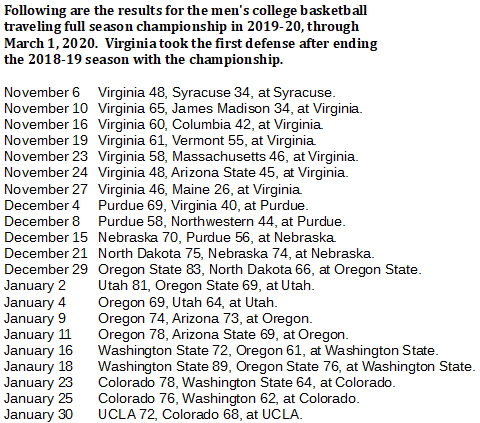