Raul Rivera, Ericson Leonora and Renzo Martini didn't even come closes to reaching the big leagues, but they were dominant performers across Italy's Serie A in 2019. 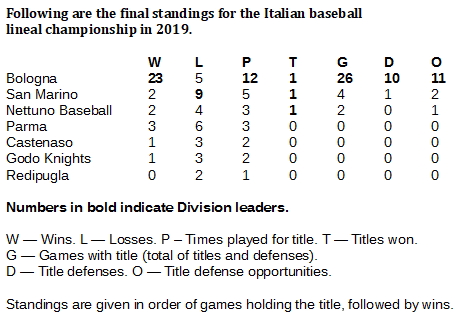 Fortitudo Bologna is one of the oldest baseball clubs in Italy, established in 1953. It's also one of the best. The club has won 12 national titles and six European championships.

And the Bologna outfit has been easily the best in Italy through recent years, winning the Serie A the last two years and four of the last six.

So, it's not surprising that Bologna blew through the Italian traveling baseball championship in 2019. The Etruscan squad began with a 14-game defense as caretaker champ after winning Serie A in 2018, then came back for another title with 10 games of defense at the end of the 2019 season while they won another scudetto.

The two leading players for Bologna, unsurprisingly, are two who long ago tried to reach the major leagues and didn't come close.

Bologna ace Raul Rivero, a 33-year-old right-hander from Cumana, Venezuela, was the top starting pitcher in the entire Serie A for 2019. Once upon a time, Rivero was a prospect in the Baltimore Orioles chain, but he topped out at 85 innings in Class AA and his career was headed to the winter and foreign leagues by 2011.

The top offensive producer for Bologna, Ericson Leonora, is a 27-year-old outfielder from Punto Fijo, Venezuela, who never passed high Class A ball with the New York Yankees because he simply couldn't hit. In three years at the high-A level, Leonora took 564 at-bats with a .218 batting average and a .630 OPS.

But those numbers were no match for the best numbers in Serie A. Those went to Renzo Martini, another one who couldn't progress with the Yankees and now is tearing up Italy. Martini, 27, is a first baseman from Valera, Venezuela. He played in 22 games for Rangers Redipugla in 2019, hitting seven homers, driving in 19 runs and producing an OPS of 1.263.

One doesn't know if players in this sort are that much better than the competition, or if short seasons with tiny runs of at-bats leave misleading impressions on the bubble-gum card. Probably the latter. 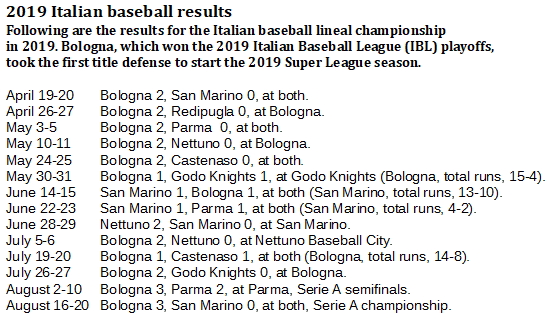