Melbourne flew to the end of the 2019-20 Australian baseball lineal championship chase, but couldn't catch Adelaide in that one. However, Melbourne won the league championship. 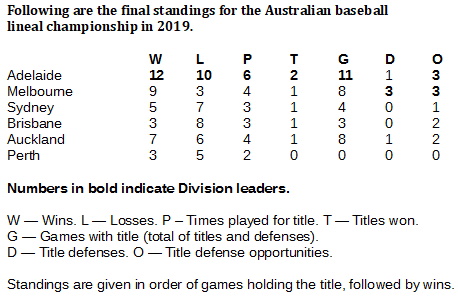 Throughout the 2019-20 Australian Baseball League season (ABL), the top teams were the Melbourne Aces, the Adelaide Giants and the Perth Heat, all crammed into the league's Southwest Division.

The Melbourne and Perth teams were driven by stars, while Adelaide was a little more balanced.
The leading hitter across the league was Melbourne's Delmon Young, the former No. 1 draft pick who batted .283 in a ten-year career with five major league clubs through 2015. Young, 35, led the Aces, and the league, with 13 homers and 42 RBI in a 40-game season.

The leading pitcher was 28-year-old right-hander Dylan Unsworth, a South African right-hander for the Perth Heat. Unsworth made it up to Class AAA for the Seattle Mariners organization in 2018. During his America pro career, Unsworth struggled to reach 90 MPH with his fastball. But in the Australian league, Unsworth is the strikeout king, whiffing 75 hitters in 71 innings this past season (both league highs), to go with six wins (another league high).

Adelaide finished the regular season with the best record in the league, 26-14. Among the top Giants players was outfielder Aaron Whitefield, who led the ABL with 23 stolen bases and played for a second with the Minnesota Twins this spring before COVID-19 closed down all the sports around the world. Adelaide starting pitcher Gunnar Kines led all pitchers with a 1.50 ERA, and Giants reliever Ryan Chafee tied for the league lead with six saves.

With the best record across the league and the Southwest Division title, the Giants still couldn't hold off Melbourne for the ABL championship. The Aces were hot during the postseason, blasting through the last two playoff series (each best-of-three) in the minimum of four games. During the championship series, 35-year-old outfielder Shane Robinson, a veteran of five big league organizations, went five-for-10 with a homer and three RBI to win the title series MVP award. Two weeks earlier, Robinson signed a contract with the Atlanta Braves for 2020.

With its late run, Melbourne made a bid to win the lineal title for the season in the ABL. But the Aces will settle for holding the title at the end of the year. Adelaide finished the season with slightly better numbers than Melbourne in the lineal, but Melbourne won both head-to-head series it played against Adelaide for the traveling title. 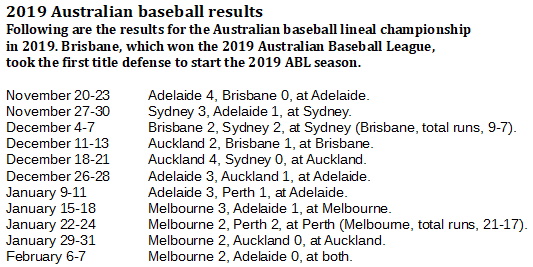