Neptunus, the dominant team in recent seasons of Dutch baseball, may have a viable challenger on its hands after losing two key series last year to the Amsterdam Pirates. 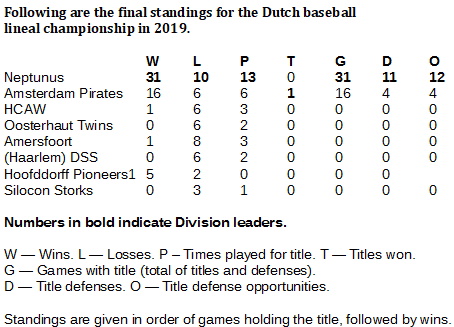 Starting in 1977 and running for 23 seasons, Parmaclima took over European club baseball. The Italian team hailing from near Milan rattled out 13 championships in the European Cup through 1999, also finishing second four times and third once.

And Parma wasn't the only Italian club distinguishing itself in Europe. From the start of the European Cup in 1963 until the end of the 20th century, Nettuno won five continental titles, Milan won three, Rimini won three and Bologna won two. Italian clubs won 26 of them in 37 years.

The change of century might often be an arbitrary time point to pick in some retrospection, but something really did change here in 2000. Parma hasn't won the European Cup since 1999. The big taker so far in this young century is Neptunus, a Dutch outfit that has won Europe eight times starting with 2000 and 10 times overall. During the 21st century, Dutch clubs have won Europe 10 times and Italian sides have won it 10 times.

So the Dutch league, Honkbal Hoofdklasse, is worth watching alongside Italy's Serie A. They are the domestic leagues most likely to produce the best baseball teams in Europe.

Making the Dutch league even more interesting is that a club from the Netherlands has emerged to fairly challenge Neptunus, which had won the Hoofdklasse five straight times entering 2019. The new winners with the lineal are the Amsterdam Pirates, who cooled down Neptunus with a three-game sweep midseason and, at the end, defeated the Rotterdam outfit in the Holland Series.

As the five-year reigning best club in Holland, Neptunus was given the title to protect as we began this lineal in 2019. Like champs, Neptunus took a 28-3 slate and 13 title defenses to a June meeting with the Pirates, which would be played in Amsterdam and Rotterdam. But the results, a three-game sweep for the Pirates, certainly weren't split.

So, Amsterdam began its own run with the traveling championship, holding it through the finish line and its Holland Series victory.

It remains that Neptunus has 31 games of title in the bank, compared with 16 for Amsterdam, through the 2019 season. But Amsterdam has the piece entering 2020. 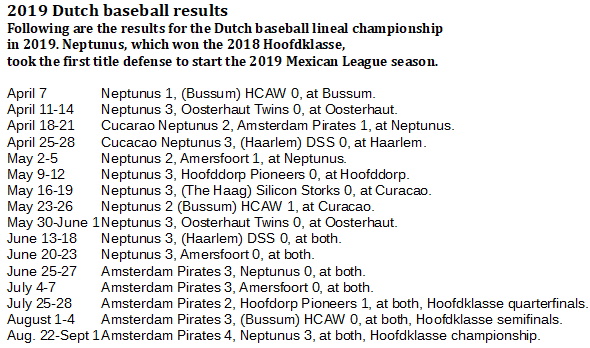