Quintana Roo, a team of unknowns, barely claimed the best season with the Mexican lineal baseball title in 2019, but a veteran Monclova squad held it at the end. 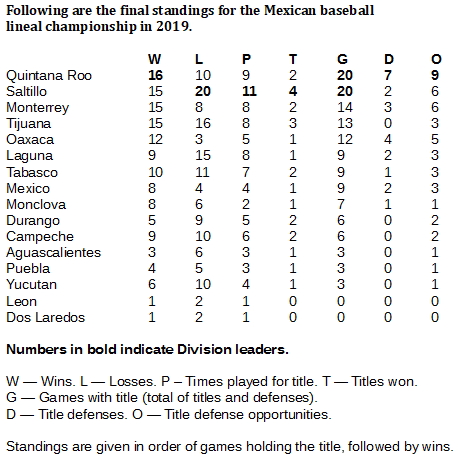 The Mexican League is a big-scoring independent minor league, which makes it essentially like the European and Asiatic baseball leagues.

The difference, of course, is that the Mexican League actually is a member of Minor League Baseball, an actually designated Class AAA league, though its teams don't have player development arrangements with major league organizations.

The Mexican League launched in 1925 and it could draw real star talent back in the day, not least because participation in the American big leagues was limited to certain kinds of people. Most often, the Mexican League took talent on the way down from the Negro Leagues, but it still sizzled.

Willie Wells was 34, already legendary, a 16-year veteran of the Negro Leagues when he debuted in the Mexican League. But he played there with such mad fire that it was the Mexican fans who gave him the name that stuck, El Diablo. In 1938, the Mexican League included Wells, Martin Dihigo, Josh Gibson, Ray Dandridge and Satchel Paige, among others.

Dihigo is legendary everywhere baseball is played in the Western Hemisphere, except for the Major Leagues. In 1938, he led the Mexican League with a .387 batting average. As a pitcher that year, he did 18-2 with a 0.90 ERA. One day that year, Dihigo and Paige were locked up in a 1-1 duel through eight. When the heat retired Paige in the ninth, Dihigo hit a walk-off homer against his reliever.

The Mexican League remains a showcase of players most likely on the way down, though the players coming through these days aren't Willie Wells and Martin Dihigo. But you know them. Some of them. It varies from team to team.

The team we're giving the big breath for at the end of the Mexican traveling season for 2019 is the Tigres de Quintana Roo, formerly the Mexico City Tigers before they moved to Cancun some years ago. The Tigres actually didn't end with more games of championship than Seraparos de Saltillo, each ending with 20. But the Serape Wearers mostly squandered four championships, defending them a total of twice. Quintana Roo won two titles, but defended them seven times.

The Quintana Roo roster from 2019 doesn't ring of familiarity. Their best major league career belonged to Henderson Alvarez III, who won 27 games in the majors and still is 29. It's a different matter when we look at who won the Mexican League, Acereros de Monclova.

At shortstop for the Acereros, it's our old friend, former Angels shortstop Erick Aybar. Batted .319 for Monclova in 2019. Houston Astros fans will fondly remember Chris Carter, who hit 131 big league homers from 2013 through 2016, mostly for terrible Astros clubs. He hit 49 out in 2019 for the Acereros. Bruce Maxwell is a left-hander hitting catcher from Germany who batted about 400 times for the Oakland Athletics through 2018. In 2019, he hit .325 with 24 homers and 112 RBI for Monclova.

So, Monclova has the lineal title at the end of the 2019 season. And it did win the Mexican League. With a roster like this, the Acereros might keep it going for a while. 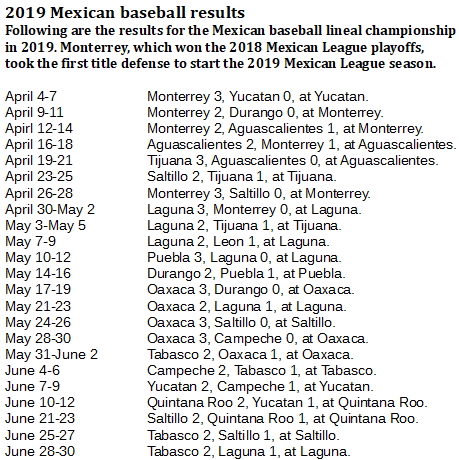 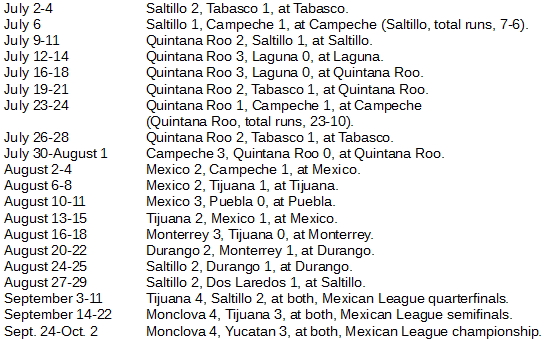