SK Wyverns barely missed winning the KBO League regular season, then flopped in the playoffs. However, they won the First Division championship in the 2019 Korean baseball pyramid. 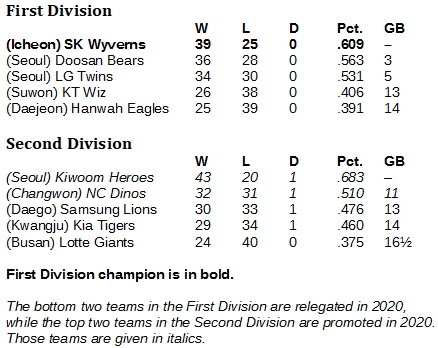 The 2019 regular season across the KBO League ended with the Doosan Bears topping the standings ahead of the SK Wyverns, and for good enough reasons. The Bears beat the Wyverns in their head-to-head series through the year, 9-7.

This entered up mattering at playoff time. As the second-place team in the KBO League's step-ladder playoffs, the Wyverns ran into the fourth-place Kiwoom Heroes when they were hot, and lost. As the first-place team, the Bears faced a tired Heroes squad, and won. That's one way to look at it.

Another way to look at it is the way we've looked at it here, with our KBO League pyramid for the 2019 season. It's a small pyramid, two divisions of five because the KBO League has 10 teams. We seeded the divisions simply by cutting the 2018 standings in half and putting the top five teams in the First Division and the bottom five teams in the Second Division.

With that, the KBO League pyramid produced a much different ordering than the full season standings. Here, the Wyverns prevailed in the First Division, and by three games over the Bears. Another KBO League playoff entrant, the LG Twins, finished five games out.

The Kiwoom Heroes finished third in the KBO League and made it to the Korea Series before falling to the Bears. In the pyramid, the Heroes won more than two-thirds of their games in the Second Division to easily win that championship. They're moving up to the First Division in 2020, along with the Second Division runner-up, the NC Dinos.

The KT Wiz and Hanwha Eagles finished at the bottom of the First Division in 2019 and are moving down to the Second Division in 2020.