Alabama, the dominant college football team of the 2010s, also has dominated the lineal football championship in the Southeastern Conference since we began tracking it in 2015. But Louisiana State wore the crown at the end of the 2019 season. 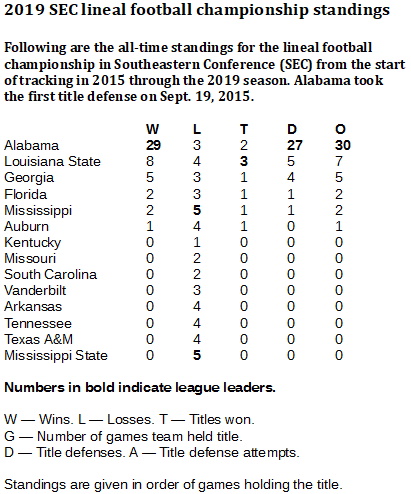 You wouldn't know the Southeastern Conference is the best college football league in the world from looking at the lineal championship standings through five years, because no one is challenging Alabama.

As we began this title in 2015, we placed it  in Alabama's care, as Alabama won the league in 2014. But the Tide immediately dropped it in a wild game in Tuscaloosa, 43-37, to Mississippi. Undeterred, the Tide snatched it back on Nov. 7 with a 30-16 win against Louisiana State in Tuscaloosa.

With that, Alabama held the title for 19 more games, more than two years, finally losing at Auburn, 26-14, on Nov. 25, 2017. Alabama regained the title the following Nov. 3 with a 29-3 win at Louisiana State, the Crimson's fourth win against LSU in as many games for the lineal.

On Nov. 9, 2019, Louisiana State went to Alabama, which had remained the titlist for nine games. This time, the Tigers pulled through with a 46-41 win. Then, LSU ran its table with four more wins in the SEC.

Alabama, then, has 29 games of title to lead all teams in the SEC. LSU is second with eight. 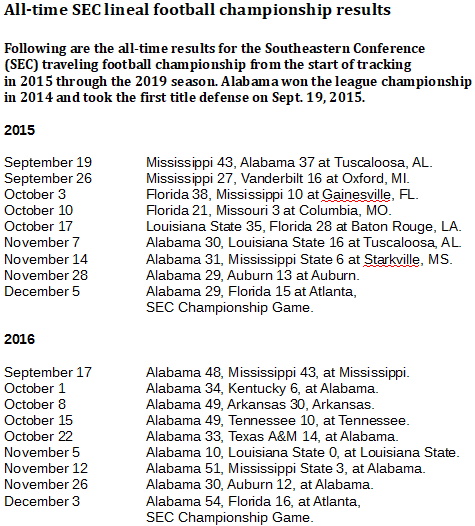 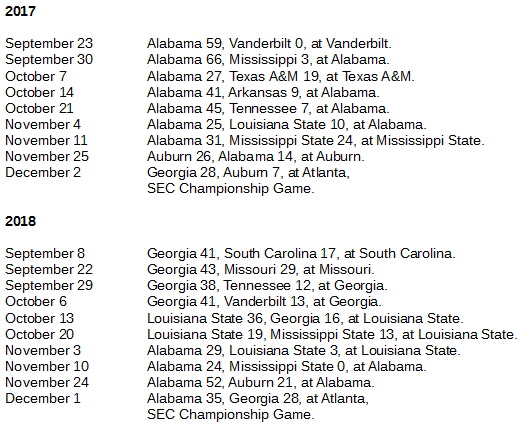