San Diego State won a key game at Boise State in 2018, and has gone on to build a seven-game lead on the Broncos for the traveling football championship in the Mountain West Conference since tracking began in 2015. 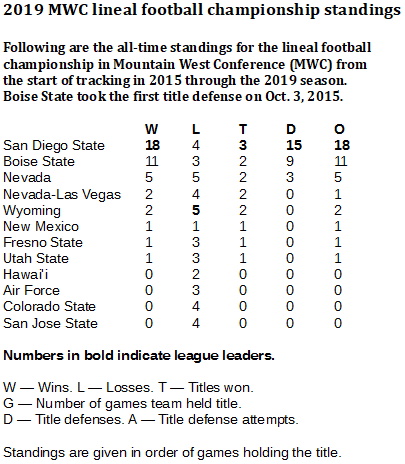 In five years of tracking the lineal football championship through the Mountain West Conference, the most likely division winners are Boise State in the Mountain Division and San Diego State in the West Division.

Likewise, they have been the dominant teams in the lineal. Perhaps the most important game in this history involved those two teams, on the blue field at Boise State, on Oct. 6, 2018.

The defending lineal champ, Boise State, entered the game with 11 games of the championship since tracking began with the 2015 season. But San Diego State entered with the all-time lead, 12 games. So, the winner was going to somehow be on top.

Nice game, though it wasn't the kind of fireworks we associate with mountain football. San Diego State played with a reserve backfield, but its defense compensated by holding the Broncos to 51 rushing yards in 36 attempts. San Diego State won, 19-13, giving up a late touchdown. After that, the Aztecs won two more before losing to Nevada.

The Aztecs regained the league lineal for a three-game spin in 2019 and lead through that season with 18 games of title. Boise State, which has not played for the prize since losing it to San Diego State, stands second with 11 wins.

The third-place team, Nevada, has five games, all in the last two seasons, losing it each time to Nevada-Las Vegas, which holds the championship at the end of 2019 with just those two victories.

The Mountain West delayed its 2020 season because of the coronavirus, but announced in late September that it would begin conference play on Oct. 24. However, a schedule was not immediately announced. 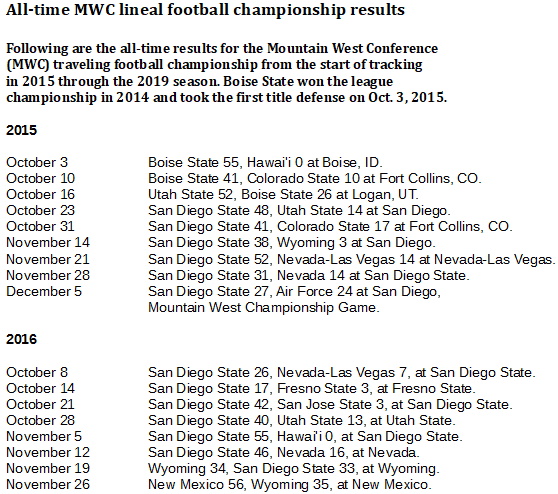 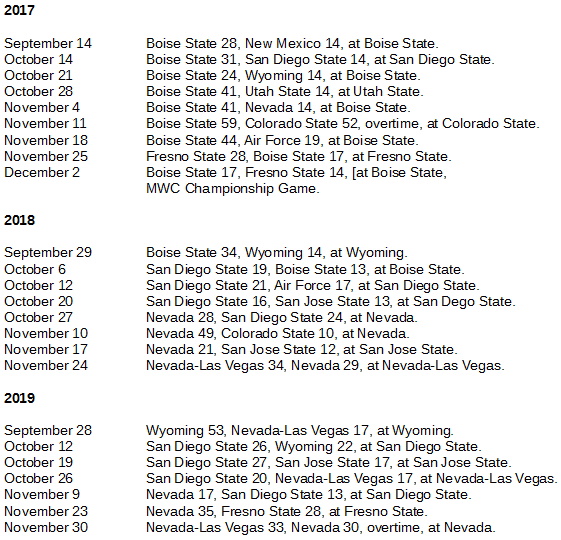