The Western half of Canada continues to dominate the lineal pro football championship across the northern country. Saskatchewan and Winnipeg led the way in 2019 and lead historically. 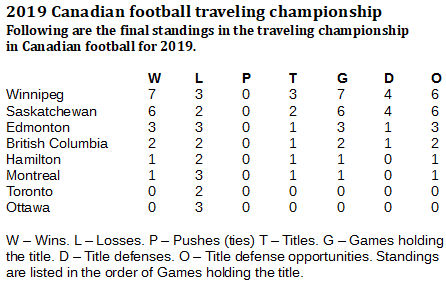 It didn't take long for the lineal championship in Canadian football to return to the West. And stay there.

The Montreal Alouettes managed a rare capture of the prize for the Eastern half by fashioning a  38-37 comeback win at home against the title-defending Winnipeg Blue Bombers on Sept. 21. That gave the East only its tenth win in 51 games that the title had been tracked to that point.

But the Als immediately dropped the title with a controversial 25-23 loss at the British Columbia Lions on Sept. 28. The West ran the table for the rest of the season with wins in the final six games, including two against the East. Three full years into tracking, the West is 21-9 in title games against the East. Some Western team has held the title in 48 out of 58 games of tracking.

It stands to reason that the top two competitors, both for the season and all-time, are Western teams, which happen to be the Blue Bombers and the Saskatchewan Rough Riders.

The Blue Bombers, capping with a 33-12 win against the Hamilton Tiger Cats for the Grey Cup, finished the year with seven games of title, compared with six for Saskatchewan. But the key result of the season was Winnipeg's 20-13 win at Saskatchewan in the Western Final on Nov. 17. The Bombers and Riders split back-to-back for the title in September, each winning at home.

All-time, Saskatchewan increased its lead with 18 games of championship, with Winnipeg next at 13. The Calgary Stampeders were in the thick of this chase with nine games of title through 2018, but the southern Albertans did not cross paths with the lineal championship in 2019.

Being careful about Covid-19, the CFL has called off its 2020 season, so the Blue Bombers will not defend their lineal championship again 2021. 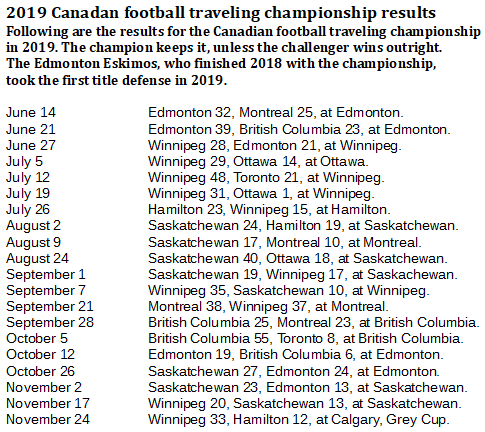