Not surprisingly, Clemson is the leading team in the Atlantic Coast Conference (ACC) lineal football championship in five years of tracking. What is surprising is that the Tigers' lead is so slim. 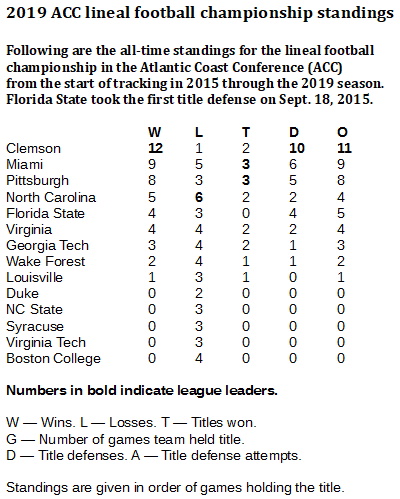 Looking at Clemson in the five years that we've tracked a lineal football championship across the Atlantic Coast Conference, we see all but complete domination.

In the ACC from 2015-2019, Clemson holds all five championships, because it has won all five of the league championship games. That means it has won its Atlantic Division five times. Clemson is 27-2 in its conference games during that stretch. In three of the five seasons, it has been perfect against the league.

As a lineal champion in the league, though, Clemson is just now starting to make a huge impact. The Tigers won only their second title on Oct. 19, 2019, with a 45-10 win at Louisville. They held it for four games through the league championship game, and they are putting it back on the line in 2019.

With those five wins, the Tigers finally moved up to the top of our five-year history with a 12-1 record. But that has them not far ahead of Miami, which is 9-5. The Tigers are scheduled to play at home against Miami on Oct. 10, their third league game of the season.

Clemson won the championship the first time it played for it, which wasn't until the 2015 ACC Championship Game. The clear leader in the league at the end of 2014 was Florida State, which returned for a moment with Jimbo Fisher and Jameis Winston as a true national power. The Seminoles won the national title at 14-0 in 2013 and didn't lose again until the Rose Bowl following 2014, a 59-20 crushing from Oregon that ended a 29-game winning streak.

But they were the team to start with as the provisional lineal titlists in the ACC, and they held it for their first four league games of 2015 before falling, 22-16, at Georgia Tech on Oct. 24, 2015. It was Florida State's first ACC loss in 28 games, including three league championship games.

Once Georgia Tech had it, the title bounced through Virginia, Miami and on to North Carolina, which carried it to the league championship game against Clemson. With a 45-37 win, the Tigers had their first league lineal, and they held it for the first six league games of 2016 before a rare, stunning loss, 43-42, on their own dirt against Pittsburgh.

Clemson didn't play again for the lineal until making that capture in Louisville last October. The structure of the ACC is largely to account, for the league is two divisions of seven, and each team plays all the others within its division, then two games per year against the other division. So, once the lineal is in some division, as it always is, it has a chance to stay there for a while.

From Pitt's 2016 win against Clemson until Wake Forest took the lineal with a 24-18 home win against North Carolina on Sept. 13, 2019, Clemson's Atlantic Division failed in four challenges against Coastal Division teams. During that period, Miami ran up all nine of its wins with three championships.

Although Notre Dame is contracted to play an average of five games per year against the ACC, that's not enough to include the Irish in this lineal. The Irish have played in the path of this lineal one time, a 41-8 loss to Miami on Nov. 11, 2017. 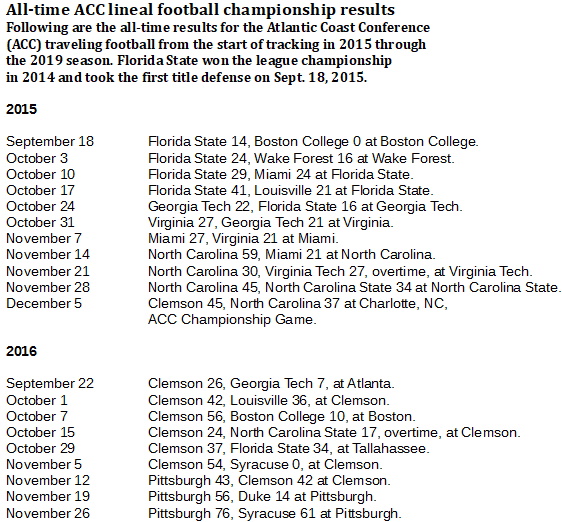 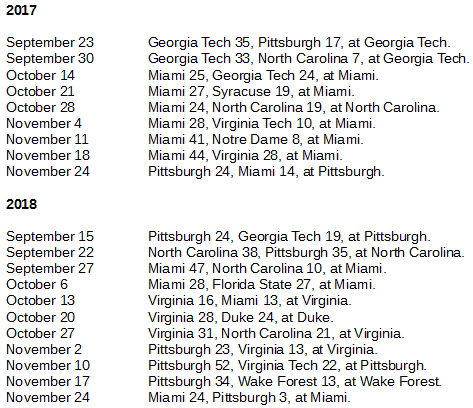