Conference-USA is never the same as it ever was, and that's what makes it one of the more interesting college football conferences. Among the present group of teams, Middle Tennessee leads the league's lineal championship chase since tracking began in 2015. 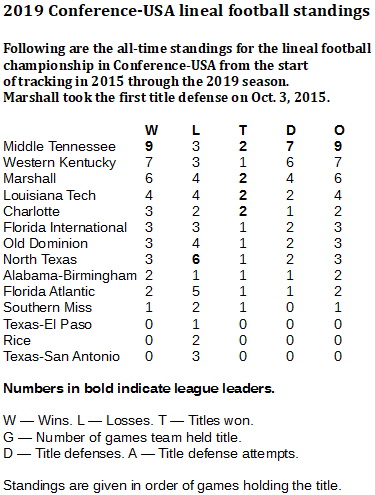 By the late 1970s, 100 years after it all began, big-time college football finally was so big that the biggest players, always wanting to get bigger, began challenging the NCAA's grip on television arrangements, which limited the number of times any team could be televised. When they tried, by forming the College Football Association, the NCAA told their schools that participation in the venture would trigger their expulsion from all NCAA competitions.

We have courts for this kind of thing, and, in 1984, the U.S. Supreme Court issued a 7-2 decision saying the NCAA overstepped its bounds, violating the Sherman Anti-Trust Act. Big-time football, not for the first or only time, defeated the NCAA. The effects were seismic.

In 1977, we had 145 colleges and universities about the land with their hats in the ring for big-time college football. But dozens of these programs, many of them in the roots of college football history, decided about then that the big time already had gotten too big, and that serious competition with the big boys was all but morally out of the question. By 1986, top-level college football endured a net loss of 40 programs, more than one-quarter of its population, leaving 105 teams in the game.

But the Supreme Court decision opened new possibilities for programs that wished to continue. They would remain in the arms race, except they might now actually be armed, because there was TV money to be made. Most programs realized their best bet was to collectively bargain for TV money with their conference brethren. In turn, the conferences realized they could bargain better by adding large markets and programs with large followings.

In 1991, a group of strong, Eastern independent football programs, all with basketball programs in a thriving Big East, realized they would benefit by striking up a football league under those same auspices, and did so. Meanwhile, Notre Dame made its own deal for a real over-the-air network, NBC, to nationally televise its home games.

Reaching for TV footprint, the Big Ten picked up Penn State in 1991, then the Southeastern Conference (SEC) took Arkansas from the Southwest Conference (SWC) and rescued South Carolina from independence in 1992. In 1996, the Big Eight merged with four high-profile teams from Texas, forming the Big 12 and breaking up the old SWC. Earthquake!

All of these leagues came out of it with lucrative national media arrangements. Especially the Big Ten, which has since figured out a way into the New York and Washington markets and, thus, distributed $52.1 million to each of its 14 member schools in 2019 just from the league's national media deals. Programs without conference brethren quickly realized that they'd better get some, or they'd be lost in the rubble.

With Houston left out of the Big 12 when the SWC broke up, it was natural that the Coogs would join four other metropolitan universities with basketball achievements but little to say about football – Cincinnati, Louisville, Memphis and Tulane (Houston, of course, did have something to say about football.). Throw in Southern Mississippi and you have Conference-USA, brand new for the 1996 season.

The purpose of the conference was clear, and not too much different from the origination of the Big East football league. These football programs needed a platform, and their basketball programs were strong enough for a strong conference in their own right. With that began a conference without traditionally strong football material, which then launched solid programs at Cincinnati, Louisville and Memphis, and at least sustained Houston.

One has to say Conference-USA, in its original design, was a rousing success, even if the success accrued to the founding members and not to the league itself. Louisville, Cincinnati and a later C-USA entry, South Florida, graduated to New Year's Day bowl hunt after entering the Big East in the 2005 re-alignment.

Texas Christian produced a one-hit wonder in 2000 with Dennis Franchione coaching and LaDainian Tomlinson running, but they were both gone when TCU entered C-USA in 2001. The new coach, Gary Patterson, incubated his program for four years in the league before moving on to the Mountain West in the 2005 scramble. During the next seven years, TCU usually was the best team in a league that also included Brigham Young, Boise State and Utah, all of which now are nationally interesting. In 2012, TCU checked into the BCS line by graduating to the Big 12.

When we look at what Conference-USA accomplished about 15 years after forming, we have to be impressed. That league, starting with next to nothing in football, graduated four programs to the highest echelon for at least a little while. TCU remains there, as does Louisville, which wangled into the Atlantic Coast Conference (ACC).

By 2015, the ACC and Big Ten took every Big East football program except for Cincinnati, Connecticut, South Florida and Temple. These schools needed a league, and they knew how to make one. They simply dipped into an expanded Conference-USA and took the best seven of those programs/marketplaces -- Central Florida, East Carolina, Houston, Memphis, Tulane, Tulsa and Southern Methodist. Throw in Navy, and we have the American Athletic Conference (AAC).

Conference-USA is playing its 25th football season in 2020, and it's safe to say there's never been a league in American college or professional sports quite like it. Call if a minor league, if you'd like, but it is a successful minor league. Through 25 years, 25 different programs have played in the league, and 11 of them have moved on to something better.

The league now is on its third iteration, and it continues to incubate football programs. But the programs it incubates today aren't nearly as strong as the weak programs it incubated at the start. Of 19 programs that started big football in 1996 or later, Conference-USA has eight of them, more than half of its membership. Six other new programs are in the Sun Belt Conference, which includes another four schools that used to be big-time, dropped out and got back in. Of the other newer programs, Boise State is in the Mountain West, UCF and USF are in the American, Liberty is independent and Florida A&M has dropped down.

By many reckonings, Conference-USA is at the bottom of the chain now. By the numbers, it hasn't been as good on the field as the Sun Belt for the last five years, and it's never going to match even the limited loyalty of the Mid-American Conference, where large public universities in Michigan and Ohio are always doing some small-scale version of Michigan-Ohio State.

When C-USA had to replenish with the 2012 re-alignment, it clearly chose the best markets it could find, and did a nice job. Now, the league is in the following Top 50 media markets: Dallas-Fort Worth (No. 5, by Nielsen, the team is North Texas), Houston (No. 8, Rice), Miami-Fort Lauderdale (No. 16, Florida International), Charlotte (No. 21, Charlotte), Nashville (No. 28, Middle Tennessee), San Antonio (No. 31, Texas-San Antonio), West Palm Beach (No. 36, Florida Atlantic), Norfolk (No. 42, Old Dominion) and Birmingham (No. 44, Alabama-Birmingham).

That's a nice patch of markets for 10 of your 14 members. By contrast, the largest MAC markets are No. 14 Detroit and No. 19 Cleveland, but the MAC teams are peripheral in these markets, as at the next level with No. 34 Columbus and No. 37 Cincinnati. The only Top 50 market in which the MAC school is the big game is No. 45 Grand Rapids-Kalamazoo-Battle Creek, with Western Michigan. The top Sun Belt markets are Atlanta (No. 10), followed by Austin (No. 40), then Mobile (No. 57), then way on down.

A frustrating twist awaits fledgling football programs in big media markets. The TV already is occupied. It's great for Conference-USA to have North Texas in the No. 5 Dallas-Fort Worth media market, but if Texas, Texas A&M, Texas Tech, Baylor, Southern Methodist, Texas Christian, the Dallas Cowboys or Allen High School are playing, then North Texas can expect a very small audience.

The same kind of problem faces these other teams in lesser conferences and better media markets. The C-USA, Sun Belt or MAC team is never better than the No. 3 college team in that market, many of which also have pros. It's worth remembering that Cincinnati, Louisville and Memphis from the original Conference-USA all had to campaign and prove it on the field just to be taken seriously in their own markets, let alone by the college football world, and they didn't face nearly as much local competition as some of these newer programs.

So, we'll see if Conference-USA even gets another 25 years. We'll see, also, if one of these Conference-USA programs becomes enough of a power in this league to earn promotion to a more lucrative league.

As far as the group of teams now in C-USA, Middle Tennessee has the lead five years into tracking the lineal championship with nine wins, followed by Western Kentucky with seven and Marshall with five. Charlotte, with three wins all-time through 2019, carries the title into 2020 with a chance to move up the standings. 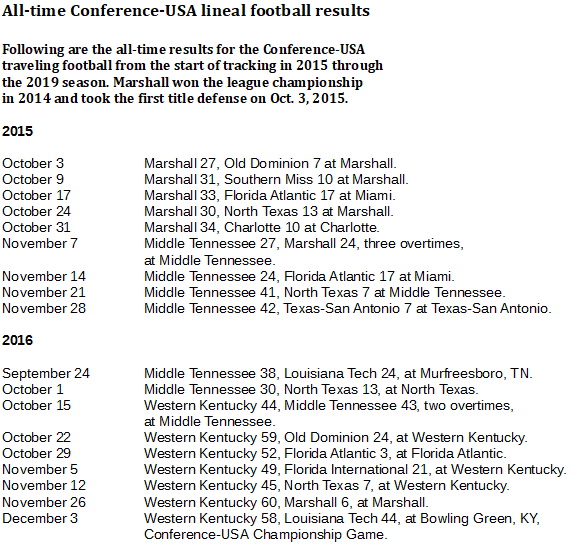 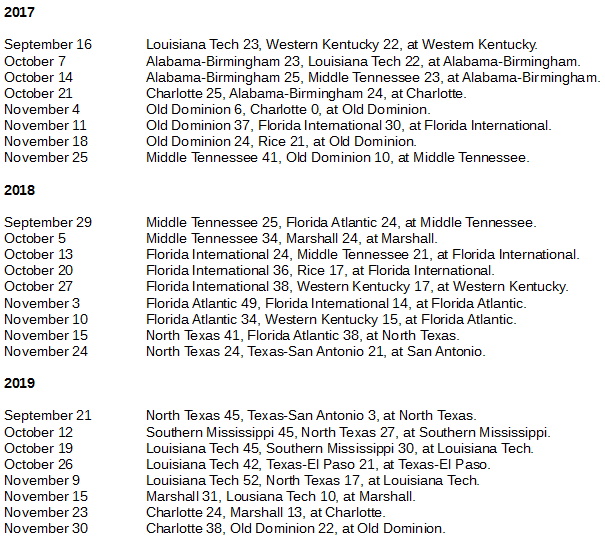