Falcons, Bucs scrum at the bottom of big-market pro football

The Atlanta Falcons and the Tampa Buccaneers remain the two least successful teams in the NFC half of the pro football lineal championship during the 21st century. The met the last week of the 2019 regular season to break their tie. 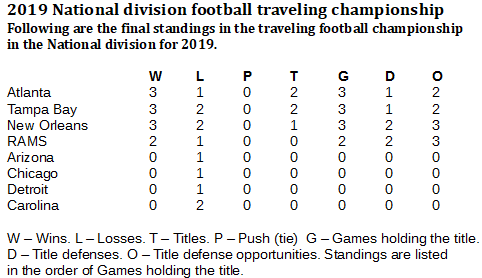 The traveling championship in the big-market half of the NFL (that is, the NFC), took a roll through the bottom of its historic standings at the end of 2019, when the Atlanta Falcons and the Tampa Bay Buccaneers squared off in Tampa on Dec. 29.
The 2019 season was unusually prosperous for the Falcons and Bucs, with the home team bringing in three games of this lineal title for the year into that season finale, and the Falcons carding two wins for the season. With those totals, the Falcons and Bucs remained at the bottom of the National half standings since tracking began in 2000, with each having six wins during that history as they took the field.
The Bucs actually had something a little familiar on the line, as a win would have given them a break-even, 8-8 finish. The Falcons, the road team entering at 6-9, really were playing out the string. But it was the Falcons who broke out to a 10-0 lead before Tampa Bay came back to establish a 22-16 almost ten minutes into the third quarter.
Several times during the remainder of the game, it appeared that Tampa Bay was just about to nail it down, but the Bucs missed two reasonable field goals before the end of the third quarter, and they just couldn't put Atlanta away. In between sacks, Falcons quarterback Matt Ryan squeezed out just enough completions to set up a field goal in the middle of the fourth, then a 34-yarder at the gun that ended regulation time in a 22-22 tie.
Five minutes into the overtime, Tampa quarterback Jameis Winston threw a pick six to Falcons defensive back Debo James, and the Falcons left the season tasting victory, as well as a rare trip to the lineal winners circle (though it was their third of the year). It was the last pass Winston threw for the Bucaneers. Their next pass will be thrown by Tom Brady.
Of course, no quarterback has won more lineals than Brady, who is 60-15 for the AFC version and 66-12 in the league-wide title. Brady is moving to a much different neighborhood after signing with the Bucs for two years at $52 million guaranteed. The Bucs now are at the bottom of the league standings at 1-8, and the loss to Atlanta dropped them to 6-12 in the big-market half.
Thus, the Falcons broke the tie in the NFC basement with seven games of title historically. All-time in the NFC chase, the Falcons are 7-16. Their winning percentage, .304, is the worst in the NFC. But they do have the ball now, and they will take it to their delayed NFL opener on Sept. 13, at Mercedes-Benz Stadium, against the Seattle Seahawks.
In the last 20 years, the New England Patriots with Brady established such huge leads across the league and the NFL that they may not be challenged for a generation. But the NFC race is thick and deeply contested.
Leading the way for the entire 21st century is the Green Bay Packers, who are 28-20 with a .583 winning percentage. Both in total wins and winning percentage across the NFC, the Packers lead. Barely. The Rams, who started the century in St. Louis as the dominant team in the NFC, now are 26-19 and .578.
The Chicago Bears (19-14, .576) are right with the Rams in winning percentage, but the Philadelphia Eagles (25-22), the Seahawks (23-17), Dallas Cowboys (22-17) and New Orleans Saints (21-20) all have more NFC wins than the Bears. The only other team with a winning NFC lineal record is the Carolina Panthers (15-13).
The Arizona Cardinals (7-12) are barely ahead of Atlanta and Tampa Bay in wins and winning percentage. The Detroit Lions (9-10) are next up from the bottom, with the unchristened Washington football team barely ahead of them at 11-16.
The San Francisco 49ers (18-22), New York Giants (17-21) and Minnesota Vikings (15-18) all are generally strong franchises that have fallen more often than not in this championship. 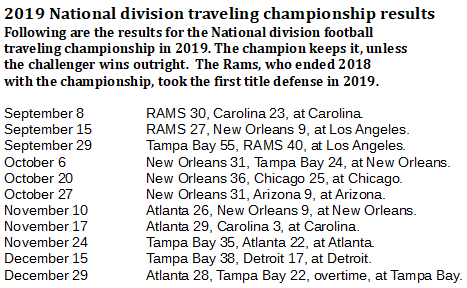