Football is big in the South, and the Sun Belt proves it

If you don't care about football in the Sun Belt Conference, it's because you haven't heard of these teams. It's not because you have seen them play. The best league no one knows about has three top contenders for its lineal title five years into tracking. 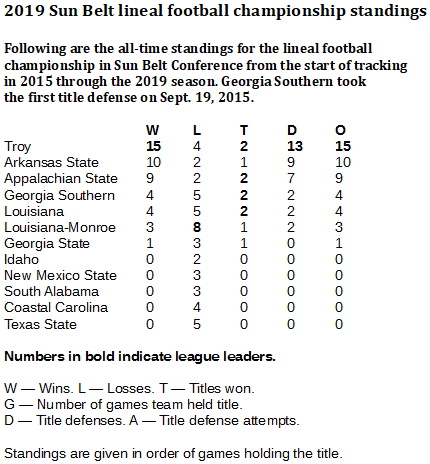 How big is football in the American South?

Everyone knows it's really big. How big is it?

Here's one way to look at it – a band of four states between Texas and the Atlantic Ocean (Louisiana, Mississippi, Alabama and South Carolina), which accounts for a combined 5.33 percent of the US population, also accounts for seven of 64 Power Five college football programs (11.9 percent), eight of 60 Group of Five programs (13.3 percent) and a whopping 20 of 126 programs (15.9 percent) playing at the FCS level. Of 256 colleges and universities playing Division I football in America, 35 of them, 13.7 percent, are located in these four states that combine for 5.33 percent of the national population.

By those measures, you'd have to say football is at least twice as big as life in the South.

Some around the country might wonder why the Sun Belt Conference should exist, but these schools have to play somewhere. And when you watch them play, you're glad they do. The Sun Belt is the best league that nobody respects, which might be mostly because no one has heard of these schools.

But they've got serious football programs here. Appalachian State, Georgia Southern, Louisiana-Monroe, Texas State and Troy have won it all nationally at lower levels. Arkansas State and Louisiana and approached it. The league has a couple of easy outs, but you shouldn't count on that if you're playing them.

The top Sun Belt teams will be out-athleted, but the best teams in this loop will not be outplayed by anyone. It's just a numbers game. We have ten conferences playing bowl-level football, and six of them have teams in the American South. That doesn't mean the teams at the bottom of this food chain won't hit.

We say college football divides into the Power Five and the Group of Five leagues, but the Group of Five really breaks into two tiers. The top of them is the second-level leagues, the American in the East and the Mountain West in the West. Then, we have a third tier with one league in the Midwest, the Mid-American Conference (MAC), and two leagues in the Southeast, Conference-USA and the Sun Belt.

And if we're just looking at recent performance on the field, the Sun Belt is the best league in that bottom tier.

Our table here shows how each of these bottom-tier leagues have performed in non-conference regular-season games from 2015-2019, along with each league's bowl record during those years and each league's "simple ratings system" ranking among the bowl-level conferences during that period on sportsreference.com's college football site, www.sports-reference.com/cfb.

By every measure here except for SRS, the Sun Belt is substantially the best of these three leagues, and it doesn't trail Conference-USA by much in SRS. And the Sun Belt is pretty strong during bowl season, winning 64 percent of its appearances in the last five years.

Anyway, don't sleep on the Sun Belt. Just because its schools are in places like Boone, NC, Troy, AL, and Monroe, LA, doesn't mean they can't play.

Among this group in the Sun Belt lineal championship through five years of tracking, Troy has the lead with 15 wins, but Arkansas State has 10 and Appalachian State, the champ at the end of 2019, has nine. 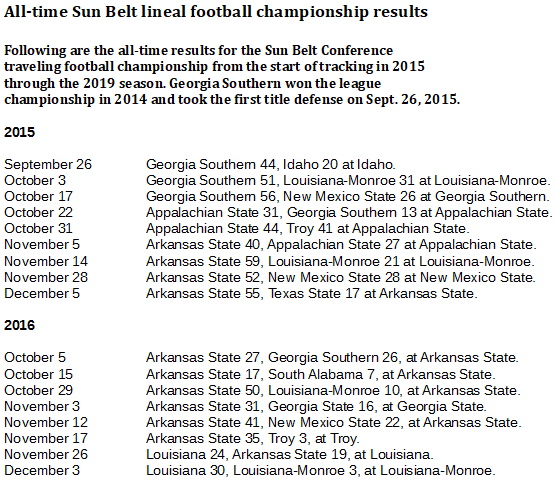 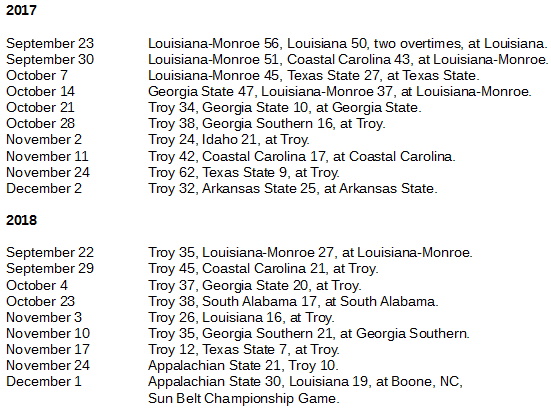