In recent seasons, Ohio State is dominating the Big Ten as never before, and that certainly holds true for the lineal football championship in the league. Five years into tracking, through 2019, Ohio State held 26 wins and the whole rest of the league held 23. 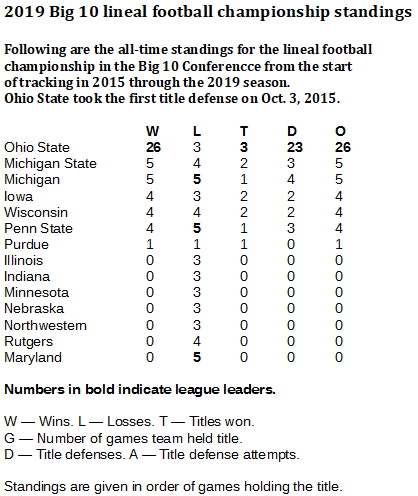 The 20th century was great for Ohio State football, and the 21st century might be better.

The Buckeyes have never been more dominant than in the last eight years, not even during the best years of Woody Hayes. Starting with the appearance of Urban Meyer in 2012, the Buckeyes are 99-10 with four undisputed Big Ten titles, a national championship and a 51-3 record in Big Ten Games. They've won the last three Big Ten championships, and probably would have won a fifth in these eight years had they been eligible in 2012.

Even during the "Big Two, Little Eight" days, the Woody and Bo days, 1968-1977, ten years during which the Buckeyes split seven Big Ten titles with Michigan and won two others outright, they were 68-8-1 in the league. During those years, overall, Ohio State was 91-16-2 with a national championship.

What does that tell us about the program Ohio State has working now? Here's a wild guess: they're pretty good.

The Buckeyes have matched that dominance in the lineal football championship of the Big Ten since we began tracking in 2015. They are 26-3 in the lineal with three titles, including the present title. The teams next to Ohio State on this ladder are Michigan State (5-4) and Michigan (5-5). 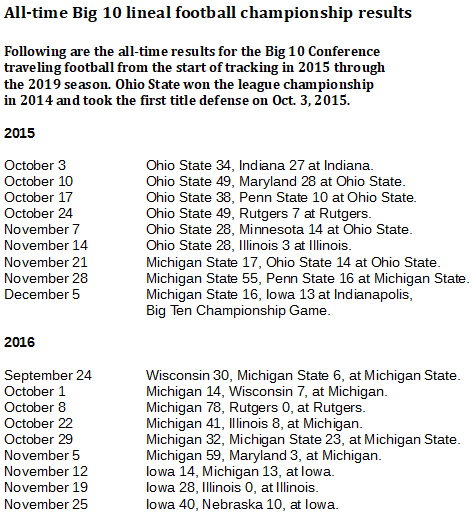 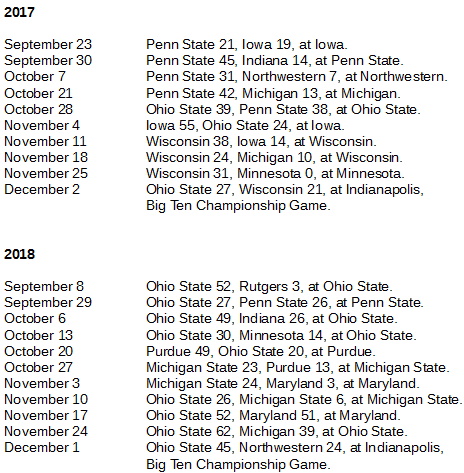